The second “Ubuntu Scope Showdown” contest has opened for entry — and there are some brilliant prizes up for grabs!

The competition, which runs from today and closes February 29, 2016, gives participants just six weeks to create an all-new original Scope for the Ubuntu Phone and publish it to the store.

Winners will be picked by a judging panel made up of Canonical employees and community members (disclaimer ahoy: I am on the judging panel) and should be announced publicly by mid-March, 2016.

Developers can build Scopes for the 2016 Showdown using the Ubuntu SDK and Scopes API, which has bindings for JavaScript, Go and C++.

Some top-tier swag, including a shiny new System76 desktop PC, Steam controllers and pair of BQ Ubuntu Phones are among the prizes being offered.

A similar Scope Showdown was held back in 2014 and won by Daniele Laudani’s carefully crafted ‘Cinema Scope’.

“We are excited to bring you yet another engaging developer competition, where the Ubuntu app developer community brings innovative and interesting new experiences for Ubuntu on mobile devices,” Canonical say of the event.

The contest is open to virtually everyone — you don’t even need to own an Ubuntu Phone to take part. The Ubuntu SDK, Scopes API and emulator tool provide all you need.

The first place winner will receive a System 76 Meerkat desktop PC worth over $600!

This ‘diminutive and unassuming’ PC is a veritable TARDIS, hiding a powerful 5th generation Intel i5 processor, 8GB RAM and a super-speedy 120GB SSD in a tiny 4.5-inch x 4.4-inch case.

The developer of the best Scope also gets a “convergence pack” comprising a bluetooth keyboard and mouse, and a slim-port adapter that — wink, wink — could come in very handy

Second place shouldn’t feel like runner with this goody bag:

Third place walks away with standout prize booty, too:

The Innovation prize is special award to be given to the Scope considered ‘most innovative and creative‘, regardless of its final ranking.

Push the envelope of what Scopes can do and the following loot could be heading to you:

So you plan on participating in the Showdown — excellent! There are a few (fairly obvious) rules and (understandable) caveats to note before getting started.

1. First up, you need to use the Ubuntu SDK IDE to publish your Scope to the Ubuntu Store.

2. Your Scope also needs to be created using one of the following bindings: Javascript, Go or C++.

3. You must use original code (code from the Scope templates, external libraries, calls to APIs, etc are fine).

4. Your Scope should be family friendly (i.e., don’t make a pr0nTube Scope), and it should only search/surface content that is legal (i.e., no PirateBay Scope).

5. Your Scope will need to comply with any copyright, trademark, usage restrictions and/or T&Cs resulting from your use of services, APIs and/or the remote servers you pull data from.

6. By entering you agree to give Canonical the right to redistribute, incorporate and/or modify your code.

See the list of rules for the Scope Showdown contest for further details, and consult the full terms of entry for details on code licensing and entry exclusions.

Tips for Getting Started

A Scope is a piece of software that aggregates data from either local sources, a remote server, or a mixture of both, to provide at-a-glance information to the Ubuntu Phone Dash (aka ‘the home screen’).

See the Scopes section of Ubuntu’s online developer documentation for a technical overview of how Scopes work and how to build them. The Tutorials section also offers some pre-made Scope templates to help you get started.

Don’t neglect design. Check through the Ubuntu design guidelines for advice on creating a UI that will keep users coming back for more.

To install the latest Ubuntu SDK (in Ubuntu 14.04 LTS +) you can add the Ubuntu SDK Team PPA. This PPA provides the most up-to-date version of the Ubuntu developer tools, libraries and APIs.

Open a new Terminal window and run the following commands:

So you want to take part, but you don’t know what to make? Excuses! Ideas are easy to find.

Some top tips for finding inspiration

Maybe you have a great idea for a Scope but don’t know how to code it. If so, feel free to share your idea in the comments (someone may see it and make it!).

For example, I’m currently playing Pokémon Silver. A ‘Pokedex Scope’ would help me find info on Pokemon I find that little bit faster. Speed is always of the essence when your Magikarp is being pummelled by a Snubbull!

Home » Event » Ubuntu Scope Showdown Is Back, And The Prizes Are Better Than Ever 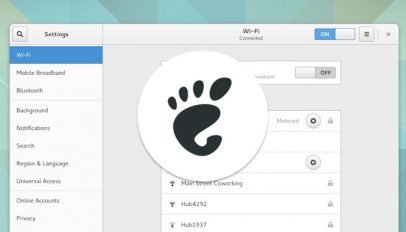 GNOME Settings To Get a Major Design Overhaul
Read Next