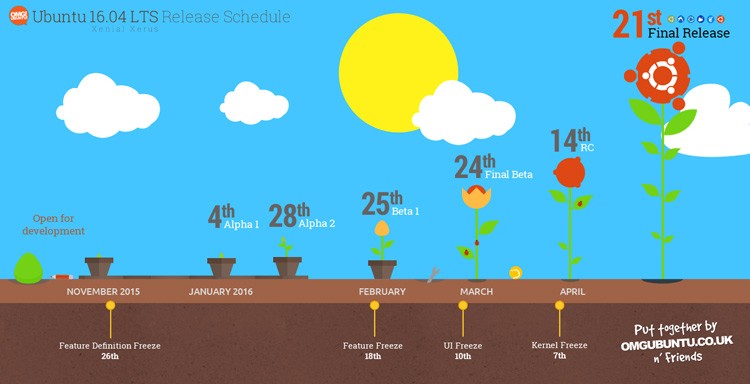 Alpha 1 in the Ubuntu 16.04 ‘Xenial Xerus’ development cycle is now available to download.

The release comes a few days later than was originally planned (December 31, 2015). Send ‘thanks’ on a postcard, c/o Christmas and New Year holidays.

A perfectly understandable delay and, perhaps, a perfect explanation as to why only three Ubuntu flavours participate in the Ubuntu 16.04 Alpha 1 milestone. They are: Lubuntu, Ubuntu MATE and China-orientated Ubuntu Kylin.

A second alpha, in which Ubuntu GNOME and Kubuntu are expected to participate, is due January 28th.

Alphas Aren’t For Everyone

Alpha releases are NOT intended for use in “production environments”; e.g., your main laptop, your work PC, etc.

Almost all of you reading this will know that. Alpha status means bugs, breakages, and incomplete features, and these test snapshots serve as an early technology preview of the next release and not a usable or dependable platform.

Ubuntu 16.04 LTS Final will be released on April 21st, 2016 will receive ongoing security and critical bug fixes until 2021.

Lubuntu 16.04 will NOT ship with LXQt. The long-promised perpetually-in-development desktop, a merger of the LXDE and Razor Qt desktop environments, is once again not stable enough to ship by default.

Instead, users of Xenial’s low-power alternative to regular Ubuntu will get the reliable and wholly familiar GTK-based LXDE desktop environment.

While this is good news for stability it does mean there is, once again, precious little beyond miscellaneous bug fixes, development toolchain and toolkit updates, and a small helping of recent-ish package upgrades to talk of.

(Though you can look forward to improved hardware compatibility in Linux Kernel 4.3.x.)

LXQt packages are available in Xenial’s archive however, so if you want to check out the progress of the next-gen desktop (and since other Linux distributions are already shipping it, it’s not a threadbare option) you can do so with a few choice commands in the LXTerminal app.

Also taking part is Ubuntu MATE, the popular Ubuntu spin for those who like Linux to be Linux-y.

Ubuntu MATE is (by clear margin) the most active flavour in the Ubuntu family. And the changes ready even in this early alpha shows there’s no sign of letup.

Although not part of the spun alpha 1 testing ISO those testers taking it for a trial run will receive an update to the new MATE 1.12 desktop sometime in the coming days.