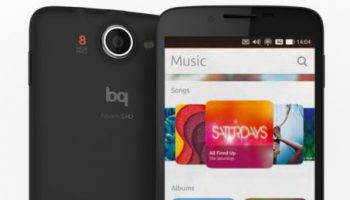 The first pair of Ubuntu phones will be priced at $200 to $400, Mark Shuttleworth, founder of Canonical, the company developing the mobile OS, has said.

Speaking at CeBIT, the annual computer exhibition held in Hanover, Germany, Shuttleworth reiterated the plan for Ubuntu’s mobile offerings to target the ‘mid-higher edge’ of the market, and at a price point between $200 and $400.

“We’re going with the higher end because we want people who are looking for a very sharp, beautiful experience and because our ambition is to be selling the future PC, the future personal computing engine.”

At this sort of price point the Ubuntu phone will be eking it out against the likes of the Google Nexus 5, which features a 2.2Ghz quad-core processor, 2GB RAM and a 1080p screen, for $350.

The Motorola ‘Moto G‘ handset, which features a display that outdoes the iPhone 5S, an all-day battery, quad-core processor and the latest Android 4.4 operating system — all for just $179 unlocked in the US. Those looking for an even better deal can find it available ‘from free’ on select carrier plans.

While neither of the upcoming pair of Ubuntu Phones — the Bq Aquaris and the Meizu MX3 — are (as far as we know) going to launch in the US soon, let alone be subsidised on plans from the country’s big-name carriers, there is no getting away from the fact that the devices will need to demonstrate value for money.

‘iPhone users are not part of target audience for Ubuntu Phone’

As phones near the $400 price bracket the more likely it’ll be that consumers look at and judge the ‘value’ they get in return. Android is an ecosystem they may already have ‘bought into’, with apps, music and files; contacts, e-mail and calendaring. The same goes for Apple and, increasingly, Windows Phone.

It’s for this reason in particular that iPhone users are not, Shuttleworth says, part of the target audience:

“An iPhone user is not our target audience, because there’s a degree of emotional attachment to the Apple ecosystem. We don’t see the same emotional connection to other platforms. We want to create something people do have a connection with.”

Connection is key. But will users find Scopes more useful than Google Now? Will the Click Store Scope curry more favour than the Google Play Store? Will people not miss being able to swap out launchers and keyboards and icon packs? Will anyone miss widgets?

The biggest question is thus: Can Ubuntu on Phones find success in its current form as a niche offering?

That’s certainly the thinking one Canonical employee, Michael Hall, subscribes to. Earlier this year Hall said that he feels the company (and by extension its hardware partners) would be content having just 1% of the mobile market. Duelling the likes of Microsoft, Google and Apple for more is, he says, not necessary:

“Unlike [Microsoft, Blackberry] who tried and failed, we don’t need to dominate the market to be successful. Even just 1% of the market would be enough to sustain and continue the development of Ubuntu for phones, and probably help cover the cost of developing it for desktops too…we don’t need to win big in order to win at all.”

Hall has a point. 1% of a huge market is better than 50% of a tiny one. The catch is that even a share this small will require a huge number of phones to be sold. Based on 1 billion smartphones being sold last year, 10 million Ubuntu phones would need to be sold per year to achieve this. Staggering!

With Ubuntu’s desktop base reportedly at the 22 million mark this is not an impossible goal, but rather one that underlines the audacity of the task at hand.

Ubuntu is also not alone in chasing dominant players. Mozilla’s Firefox OS continues to go to strength-to-strength, with Sony among the many hardware companies planning to launch phones running it. Jolla’s Sailfish and Samsung/Intel’s Tizen are also hoping to make an impact in 2014.

At $200 — $400, and based on the current specs we know of, the first Ubuntu Phones will be priced competitively — but price alone is just one fist in a fight with no rules.