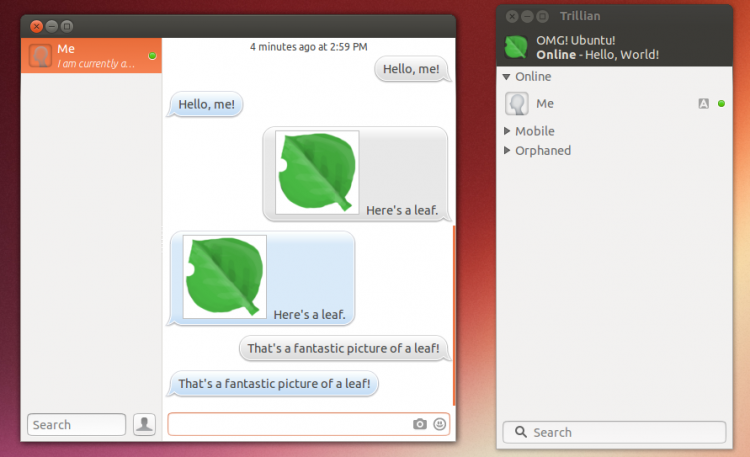 Trillian, one-time grand-daddy of instant messaging world, has launched a limited-access beta of their Linux client.

Pro users of the service can, from this week, download a beta of Trillian for Linux to put it through its paces.

Back In My Day, Kids…

For readers of a certain age Trillian is a name synonymous with online chat. It was one of the first clients to support multiple protocols, letting users chat to AIM, Yahoo! or MSN buddies without the need to run three separate applications – something that seemed far more innovative back in the early 2000’s than it does now.

In the intervening years the app has seen its user base wilt as the walled gardens of feuding protocols were either felled or torn down (sob, MSN.)

But despite – or in spite of – this the company hasn’t shut up shop, but branched out to offer Mac, Android, iOS and Blackberry versions of their app.

On to the beta build itself.

The easy option for Trillian’s developers would have been to wrap up a web-based version of their service in a desktop window.

Instead they opted to go the harder, authentic route and craft a native GTK experience that blends seamlessly with the Ubuntu desktop.

As a result Trillian feels incredibly at home.

The contact list picks up GTK theme colours without issue; menus are readable; and buttons and widgets are as they would be in any regular desktop app.

Sadly Unity launcher badge and quicklist support is missing for now. But the robust feature set and the decision to give Linux users a first-class app mean I’m willing to overlook this for now.

Not Free For All – For Now, Anyway

“Wow! All of that’s great!” you say. But in the back of your mind you can’t help but wonder what the catch is.

Sadly, there is one.

Cerulean Studios, the company behind Trillian, are limiting access to the Linux version of Trillian to paid-up ‘Pro’ members of the service only. Anyone can download the installer, install it, and open it, but without a Pro account you can’t make use of it.

But fear not. Cerulean have told us that the Linux version will be free to use in the future, albeit with a limited feature set. This is the same model used on Windows and Mac OS X.

So why limit access to the beta if it’ll be free in the future?

Cerulean say it’s needed to gauge the seriousness of demand from Linux users; they want to see if enough Linux users are willing to “support the project financially” to make continuing with its development worth their while.

Every Pro account paid for during the beta period will, they say, help “...prove that a healthy and vibrant market for Linux applications exists for smaller software shops like Cerulean.”

My counter-argument would be that by limiting access to a beta they’re preventing a massive pool of potential customers from finding out if it’s worth paying for.

For working, speedy file transfer alone, it certainly is!

If you’re already a Pro user of Trillian and want to take the app for a spin you can download a .deb installer for Ubuntu 12.04 LTS up at the link below.