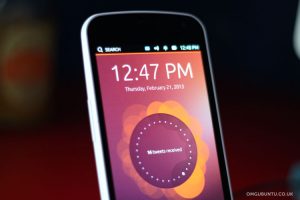 Ubuntu Touch for Phones will be in a usable enough state for daily use by the end of the month.

Announcing the ‘end of may’ goal on his blog, Canonical’s Director of Ubuntu Engineering Rick Spencer argues that ‘progress accelerates when people are using, in addition to building, software’.

Adding that this ‘dog-fooding’ allows developers to ‘….really know how far there is between where you are, and a shippable state’.

To this end both Spencer’s team, and others within Canonical, will be aiming to ensure key task of the everyday phone experience will be working by the deadline.

So what kind of ‘useable state’ is being aimed for?

These key parts of the core phone experience will allow developers working on it, as well as those developing apps for it, to see better gauge priorities, feature needs, and so on.

While the end of May deadline is a soft goal (one that I’m fairly certain will be reached) Ubuntu Touch still won’t be quite ready for the prime time on user handsets.

But on that front you shouldn’t have too long to wait: Ubuntu Community Manager Jono Bacon has recently said that Canonical are aiming to have a ‘1.0 Ubuntu Touch platform …ready for October so it can then be delivered to customers for deployment on handsets in Q1/Q2 2014.’