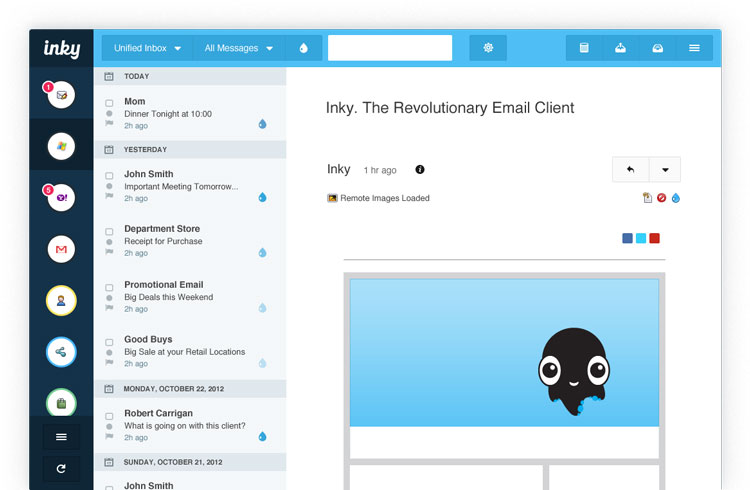 Open-source e-mail app Geary may have struggled to find funding recently, but that doesn’t mean it’s game over for desktop e-mail apps.

“Revolutionary Email client” Inky, though not well known, is on its way to the Linux desktop. The application is already available to download for free on OS X and Windows.

Inky is pretty unlike any other email app currently available on Linux – not just in looks but also in features.

For example, Inky scans your inbox and contacts during set-up to work out which messages are more likely to be ‘important’ to you, and which aren’t. The darker an ink drop next to a message the more important Inky considers it.

Setting up accounts is really easy – and yes you can add multiple-accounts, including  GMail, Yahoo! and Windows Live/Outlook, and any other account supporting POP or IMAP.

Smart Views can be added to the sidebar to let you quickly jump to email grouped by a specific theme (shopping mail shots, social networking, mails from contacts only, etc).

In fact, many of Inky’s features remind me more of web-mail services like GMail than traditional desktop apps. Which is quite an exciting thing.

You can read about more of Inky’s features on its website.

Inky devs aren’t giving any firm date for the release of a Linux port other than a vague “quite soon”. But ‘soon’ is better than a ‘never’, so I’m okay with that.

In all, Inky is unlikely to persuade ardent web-mail users to switch to a dedicated desktop app, but if the Linux version maintains feature parity with the Windows and Mac clients it’ll certainly offer a compelling alternative for those using, but not satisfied with, Thunderbird, Evolution or Geary.

Thanks to Steven Judge