The Ubuntu button in 13.04 has received a last minute change: the background swirl now spins in a clockwise direction.

Trivial, right? In fact, if had it arrived sooner, then our recent post on ‘7 subtle changes in Unity 7 you probably won’t notice…‘ would have been 8!

But why has the background direction been altered? And why now?

We don’t need to go too far back in history to answer the latter question, just to yesterday when a bug report was filed by Matthieu James, Ubuntu’s icon maker.

In the issue he cites a mail forwarded to him by Mark Shuttleworth in which a user argues that the button background swirl should spin clockwise, as there are cultural and historical dispositions favouring this procession.

Now, there is certainly no denying that, for most cultures, the clockwise/right-leaning movement is seen as being ‘good’, ‘positive’, and, in some cases, ‘holy’.

Whether it makes sense to us today is moot; the fact is that the vast majority of us are socialised to believe that clockwise = moving forward and moving forward = good. It sits within in us at a subconscious level, handed down to us from ancient times when the movement of the sun in the sky ( ‘east’ to ‘west’) was revered as important, life-giving and divine.

The procession of clockwise over anti-clockwise is a movement we’re just darn well used to. Even some of our words, like ‘sinister’ are hold overs from this, being derived from the latin for anti-clockwise ‘sinistro‘!

Back to the present. The BFB icon in 13.04 has now been changed (albeit committed to Unity but not yet landed) to conform to this cultural/historical expectation.

This hasn’t pleased everyone, especially Steve Riley who writes:

“The notion that left = bad and right = good is steeped in ancient (and wrong) beliefs about what nature prefers. It’s the 21st century now. Do people really make technology decisions based on iron age fairy tales?”

He wasn’t alone in feeling a little peeved. The Ubuntu Documentation team, who have already taken screenshots of Ubuntu 13.04, also felt a bit put out. And Kevin Godby raised the point of whether this change means other anti-clockwise-leaning icons will also be hanged, like the new Software Updater icon.

Ultimately it’s a change that is both trivial and, to those who don’t care about such inferences, an irrelevant one at that.

But for designers, who speak a language that’s heavily based on symbolism, the change of direction will be seen a touch of finesse aimed at reassuring the subconscious eye with a familiar shapes, patterns and flows.

And that, cultural reasonings aside, is the most important thing: making sure it looks good. 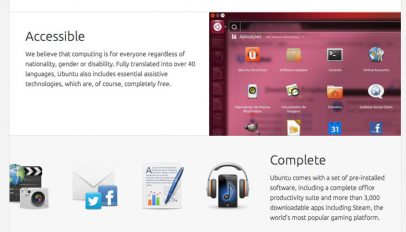