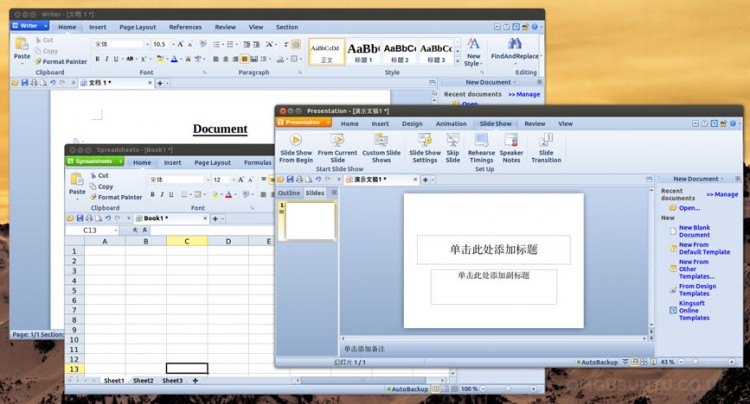 WPS Office, built by Chinese development group Kingsoft, claims to be the leading free office suite in China. And with such a familiar looking interface that’s not a difficult notion to swallow.

Three applications make up the suite:

Each of the apps are incredibly familiar in look to their Microsoft counterparts.

Compared to other free offerings like LibreOffice, Google Docs, and Lotus Symphony, WPS has a distinct advantage: a lower learning curve for those already versed, trained, or used to the Windows apps.

Trivial sounding, sure. But for many the notion of having relearn what they already know fosters reluctance. WPS, with its marriage of free and familiar, has a good punt at solving this.

The Qt suite apes the interface of Microsoft’s ‘Ribbon’ interface, and whilst I can’t tell you whether it’s 100% accurate in its replication (I haven’t used Microsoft Office long enough to tell), it’s certainly authentic looking.

For non-Ribbon fans WPS Office comes with the option of enabling the old, menu-based Office look

WPS Office also adds a few handy features of its own, including an online pool of document templates and the ability to edit multiple documents in tabs.

Biggest drawbacks: the release is beta; it sucks at opening .ODT files. Oh, and the entire interface is in Chinese by default (though reader Mohammed Sayanvala has a fix for the latter on his blog).

The latest version of WPS Office, a beta, can be downloaded for Ubuntu 32bit by hitting the button below:

Once the suite has fully downloaded double-click on the .Deb file to install through the Ubuntu Software Center.

After installation completes you’ll be able to launch each of the three applications through the Unity Dash.

On first run you’ll be prompted to sign up to.. Well, I don’t know because my Chinese is non-existent. Suffice to say, you can slap any old rubbish into the required fields and it’ll disappear.