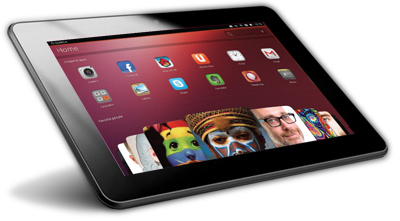 An Australian website is taking pre-orders for an Ubuntu tablet – but is it legit?

I was pointed to the website of the ‘intermatrix u7’ on Google+. It bills itself as ‘the world’s first Ubuntu Tablet‘.

But before you part ways with your hard-earned cash, take a step back and consider what’s really on offer here.

The Intermatrix U7 website lists ‘October’ as the shipping date for the device. This is a wee bit disingenuous on their part.

Whilst October is the ‘target’ for the entry-level smartphone experience to arrive in Ubuntu, it is not the expected date for the Ubuntu Tablet interface.

Indeed, work on the tablet interface is expected to continue into 2014, with Mark Shuttleworth saying that spring 2014 is the most likely date we’ll start seeing tablets turn up on shelves.

That’s not to say that work on the tablet UI won’t be at a satisfactory level by October, but with Mir, and a boat-load of interface and app work to be done, it’s best not to presume it will be.

Then there’s the fluctuating price.

Currently the U7 is set at AU$299 but, according to the website, it is expected to increase in price at a later date. Luckily for you if you order now you get to lock in this super-cheap price.

That tugs on my cynicism like a dog on a trouser leg. Delve into the Terms & Conditions and you’ll learn:

Further more is the worrying assertion that, despite having charged your card the second you place your pre-order, you agree that:

Pushing aside my cynicism for a second, the specifications of the Intermatrix U7 do read like a Tablet capable of running Ubuntu Touch:

No word on battery life, but since all the above is ‘subject to change’ it probably wouldn’t mean much anyway.

The Intermatrix U7 may well be a genuine product backed by a genuine company. But at barely a month post-tablet reveal, it’s a little too early to take cash upfront for something that won’t be available for potentially another year.

It is, of course, for you to judge. Hit the button below to visit the Intermatrix website to learn more.