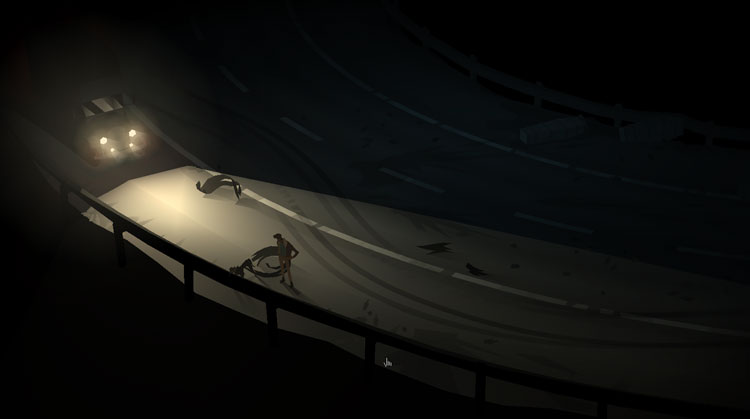 Taking inspiration from classic adventure games like King’s Quest and contemporary titles like The Walking Dead, developers Jake Elliott and Tamas Kemenczy focus on characters and storytelling rather than action and even puzzle solving.

Kentucky Route Zero takes place over five acts – only the first of which has been released.

You play as Conway, an antiques delivery man searching this humble corner of Kentucky (situated near Mammoth Cave National Park) for a mysterious delivery address.

The narrative is as unpretentious and understated as your character. What starts as everyday, albeit strange, conversations can become fantastical scenes a click later. Disappearing characters and looming shadows are haunting yet intriguing threads woven into a rich and oft surreal narrative experience.

Despite the focus on a literary component, the developers don’t lose sight of their audience or the nature of the experience. A scene that discusses a character’s “theorypoetics” is tongue-in-cheek yet captivating at the same time.

The work never feels pretentious or strained in its treatment of the artistic forms on display or the magical realist genre itself.

“…a balance between text adventure and graphic adventure…”

The only quest is discovery. The developers strike a balance between text adventure and graphic adventure, offering literary, aural, and visual experiences throughout your journey. As you search the backroads for interesting locations, some will open up through description only and others through explorable landscapes.

As you make your way through the various locales and talk to various characters, the magical in the real complicates the question of what simply is. You’ll find yourself piling on the questions until the abrupt end of Act I.

Though frustrating for those seeking resolution, explanation, and instant gratification, the fermata accents the endless possibilities of the magical realist story to come in Acts II–V.

You won’t be combining items from your inventory in an episode of MacGyver but you will make narrative decisions that may or may not affect the outcome of your experience.

The lack of puzzle solving, an inventory, and other traditional adventure game components doesn’t take away from the experience.

“Every character has a tinge of the fantastical…”

The seemingly inconsequential dialogue choices open up characters and individual narratives unique to your own play-through and imagination. For players looking for cause-and-effect at every turn, this may be more tedious than intriguing; but there’s something oddly fascinating about choosing your dog’s name from a list or between a terse and inquisitive reply – especially when that choice doesn’t affect a play-through directly.

I’m often tempted to skip through dialogue and backstory in games that feature uninspiring quests or banal characters. In Kentucky Route Zero, every character has a tinge of the fantastical, whether it reveals scenes of the everyday or deepens the enigma at the end of Act I.

When you’re not directly exploring a location, you’re thrown into a simple, black-and-white map with roads and the occasional landmark. Exploration on the map is straightforward but unfruitful. Landmarks are far and few between, though are themselves intriguing.

With the non-linear narrative, dialogue choices, one-time events, and easily missed locations, replayability is fantastic – indeed, I discovered an entire scene of Act I in a second play-through.

Kentucky Route Zero mixes simplicity with illustrative landscapes. The effect is a beautifully crafted world that is both indeterminate and painfully real. The play between light and dark reveals much in the shadows – some of a grim reality, others of a world that stretches slightly beyond your field of vision and time.

The black-and-white map is as sparse as the handful of landmarks suggests, but the highway layout mimics the real-world location closely. Though the least successful component of the work, the attention to detail, even in its relative scarcity, leaves me hopeful for a more detailed map in future acts – be it visually or in the number of explorable locales.

Character models are unique, yet slightly under-featured, complementing the visual style of the surrounding landscape and individualising each character in the smallest details that are and aren’t present.

At times your only companions are your dog, the hum of the truck’s engine, and the ambient noises that make headphones a must. Sounds of passing cars on Route 65 and the distant chirps of crickets liven up the black-and-white map.

As there isn’t much interaction with the landscape, sounds outside footsteps are generally kept to a minimum, emphasising the haunting noises and aural events in scenes when they do occur. Though I expected some sound in the text-based exploration of some locations, the silence was distressing in itself.

The soundtrack for Act I is fairly short – weighing in at four works – but the original score by Ben Babbitt and a folksy rendition of a hymn used at one location in the game are fantastic nonetheless.

I hesitate to pin Kentucky Route Zero as simply a “game”. The debate about games as art rages on and this work is a prime example of the literary, visual, and aural talent required in crafting a unique experience amongst the throng of first person shooters and casual puzzle games. This is not to say that FPSs and puzzles don’t have a place, but that a work like Kentucky Route Zero stretches beyond the confines of “gaming”.

“Can we have games that have meaning? That carry an idea? That tell you something that you can resonate with? There are people who build their life around this idea of creating meaningful content. And these people are called authors.”

Kentucky Route Zero is a work that taps into the traditional adventure game formula to create a meaningful experience far beyond what the notion of a “game” suggests. It is interactive art as much as it is entertainment. What may be a “boring” experience to its traditional market is a meaningful, poetic experience to another.

The accessibility and depth of Elliott and Kemenczy’s artistry and artistic dialogue open the door for the magical realist adventure to come. Act I is surely the stepping stone to a vast narrative ahead, and Acts II–V are bound to leave gamers and non-gamers awed.

Kentucky Route Zero is currently available from the developers’ website and on Steam for Windows, OS X, and Linux. $25 nets you Act I, the soundtrack, a Steam key, and the remaining four acts when they’re released “over the next year or so”. 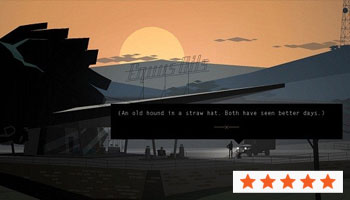 A stunning look at the fantastical in the everyday. 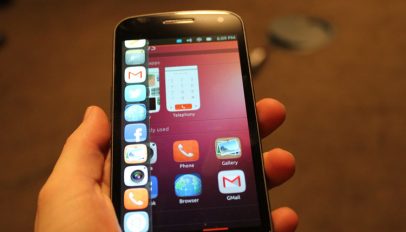