Have you played on an in-store demo unit of the Wii U recently? If so there’s a good chance you were actually playing a game on Ubuntu.

Ubuntu’s aubergine splash screen was snapped mid-boot in a Wii U demo booth at a BestBuy store. 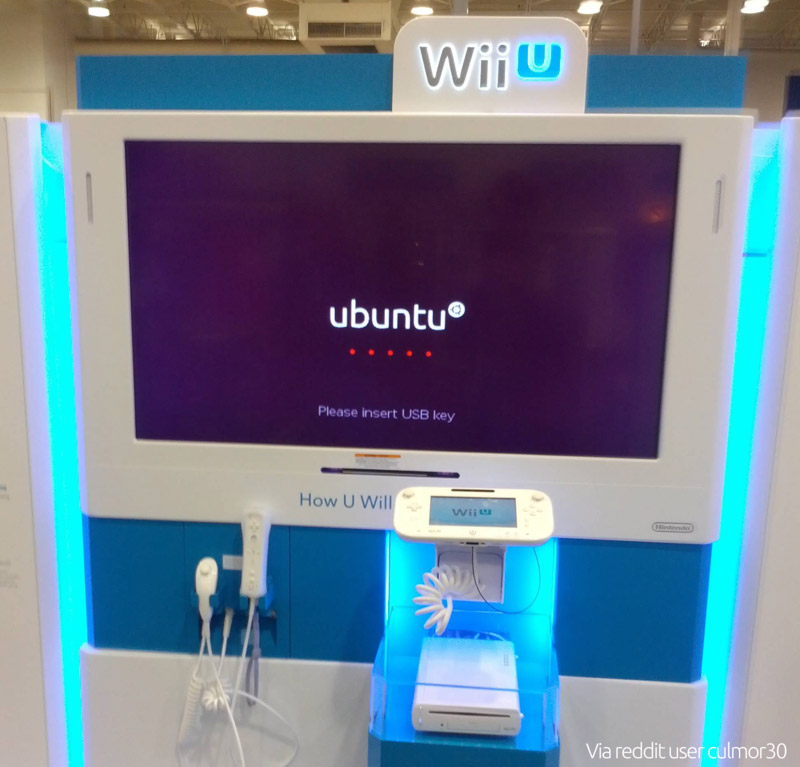 Sounds strange, right? But according to one Reddit user, schizm0, the Wii U demo booths in stores don’t run off a Wii U console at all:

“[It’s] not a genuine Wii U. Runs a port of Rayman Legends but that’s it. The computer itself is under the Wii U. Only the controller is real.

His source? A Gamestop manager.

But how likely is this to be true?

Based on the experience of some who have played on these demo units, it would go someway to explaining early performance woes:

“I remember being disappointed by the Gamepad visuals on the demo stations. Everything seemed extra blurry and not very responsive unlike the actual system.”

However, it seems like a mighty complex effort to go to just for a demo unit.

And porting the game from Wii U to Linux wouldn’t be a trivial – or cheap – task (though Ubisoft have said that they plan to bring the game in question to the PC).

These snaps were taken before the general release of the Wii U (which, here in the UK, is still yet to happen) so this could’ve been one attempt by Nintendo to get the console out there in the hands of shoppers without the risk of a console ‘leak’.

The ‘Insert USB Key’ error on the boot screen would certainly point to a security measure being in place.

Ultimately, whether real, fake or not-as-currently-described, the image serves at least to stir the imagination.

But for now it’s back to reality…