Syspeek is a small panel applet showing system resource information through a neat and tidy menu. In one click you can swat up on your system stats in real-time.

System Monitors aren’t essential tools by any means, but users of beta software often like to to use them to keep an eye out for any unexpected spikes in RAM or CPU usage. 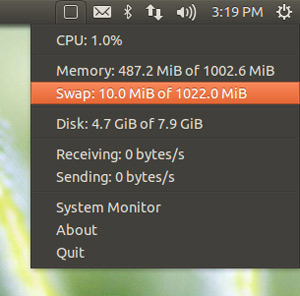 The icon that Syspeek displays on the panel is animated, and changes on every 10% increase (or decrease) of CPU load. When the CPU hit 100% the icon turns red.

Although not as accurate as the data in the drop down menu it does allow you to ‘passively’ monitor general overall processor load.

Other than that there’s little else to it.

The ‘official’ Syspeek PPA doesn’t provide packages for Ubuntu 12.04 or 12.10, so reader Greg Ramey has taken it upon himself to provide this support

He’s made the packages available through a PPA of his own, though no new features or bugs fixes have been added.

Christopher Moor I would like to see title bars hidden. Ability for…
What to Expect in GNOME 3.36, Including New Lock Screen

David Gabel That's not quite the point. While I prefer DDG, Bing…
BingWall is —Yes, a Bing Wallpaper App for Ubuntu

ldrn No more individually clicking update for each extension sounds *fantastic*.
What to Expect in GNOME 3.36, Including New Lock Screen