If the loudest voices in the open-source community were to be believed you’d get the impression that Ubuntu’s Unity desktop is universally loathed.

But in reality it isn’t. Ubuntu’s ever-increasing user-base, OEM deals with Dell, ASUS and Lenovo, and user-testing proves this.

But if there is one valid criticism to be levelled at Unity it’s that it’s Ubuntu-only. This isn’t technically true as the code for Unity (and its components) is freely available for anyone to adapt, port, develop-upon for other Linux distros.

And in the case of Fedora, a team of wily developers have done just that. 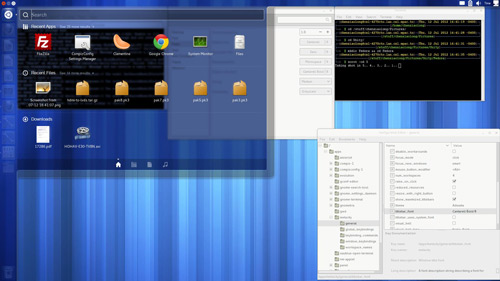 The images above and below, kindly sent to us by one of the GNOME Ayatana team working on the port, show Unity 5.12 and Compiz running in Fedora 17 with minimal omissions Fedorians wanting to take Unity for a spin should add the Unity repo @ download.opensuse.org/repositories/GNOME:/Ayatana/Fedora_17/.

But, and this needs to be noted, updating with this repo added will replace some core GNOME components with Unity-compatible versions.

To add the repo via the Terminal run:

Hereon-in you will want to refer to the distro package list for your architecture as, at least during my attempt to install it, a simple ‘yum install unity‘ did not pull in everything that was needed. I also found that install gconf-editor was essential to Unity loading.

The work thus far is not a complete, polished port. It may fail, it may work. If you encounter problems just restart your computer and enter your normal ‘GNOME’ session at the log-in screen or troubleshoot the errors using a Terminal.

More information on the port can be found @ build.opensuse.org/project/users?project=GNOME:Ayatana

Thanks to Damian Ivanov