A refined, compacted session indicator has landed in Ubuntu 12.10.

The new applet merges items from the previously separate User and System menus into one new look, unified drop-down. 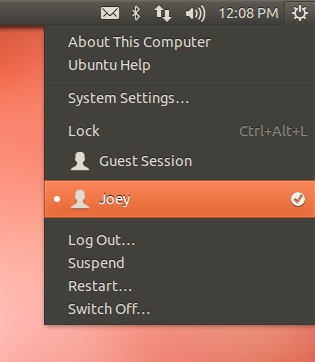 The simplification, which sees the “devices” section dropped entirely, is designed to do more than save panel space.

User testing of Ubuntu revealed that many users had issues finding various items that were spread across the two-menu approach.

Aiming to correct this, the updated session indicator makes it easier to find the official Help documents (‘Ubuntu Help’), as well as the version of Ubuntu installed (‘About this Computer’).

The redesign also finally puts ‘Switch User Account’ in the same location as other session options, and sees ‘Shut Down’ renamed to the user-intelligible ‘Switch Off…’.

As with all updates we highlight in a development release of Ubuntu, what you see above is subject to change.