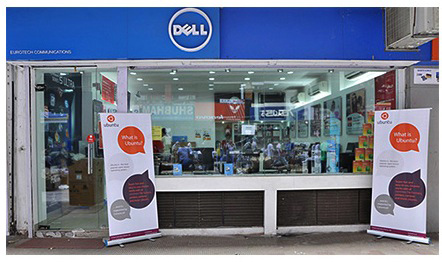 Dell computers pre-loaded with Ubuntu are being rolled out across 850 retail stores in India.

The move is the latest in a string of retail manoeuvres by Canonical and Dell, having arrived in 220 store across China late last year. That figure has now risen to 350.

And, much like the Chinese roll-out, in-store Ubuntu branding, training and support will be set up in stores to help relay the benefits of Ubuntu to the public.

To kick off the arrival Dell will be selling their Inspiron 14R and 15R laptops with Ubuntu from June 21st. Further models will go on sale later in the year.

This incursion into India matches up with Canonical’s expectation that Ubuntu will ship on 5% of all PCs worldwide next year.

“A founding principle of Ubuntu is to make computing more accessible. By working with Dell to bring these machines to market, we’re providing millions of people with the opportunity of an affordable, high-quality computing experience – in some cases, for the first time.”

It’s expected that Ubuntu retail availability will be extended to additional territories before the year is out.

‘Ubuntu Accomplishments’ Makes Getting Involved in Ubuntu Fun
Read Next