‘How can I disable the App Menu in Unity?‘ is a question often asked by a handful of users unable to adjust to the menus of applications being embedded in Unity’s top panel.

But a solution to this minor ‘gripe’ is, seemingly, on the way.

Design Team to the Rescue

Buried among the latest raft of mock-ups from Ubuntu Design Team members Christian Giordano & John Lea is a revamped ‘User Interface‘ pane that houses an option to turn off Ubuntu’s App Menu. The option, which appears in a new ‘User Interface > Behaviour’ tab, is one of two settings listed under the heading of ‘Application Menu‘.

The first – and default – option is ‘Always integrated in top bar‘. This is the behaviour uses in Ubuntu for the last few releases. The second option appears to offer the options switch off the Ubuntu ‘App Menu’ and, instead, integrate menus with individual app windows.

Disabling the App Menu is nothing new.

Ubuntu 11.10 users can already ‘disable’ the global menu by removing the ‘appmenu‘ package from the Software Centre. But the presence of a check box makes for a less drastic and more intuitive way to tweak the desktop to suit your own workflow.

The planned option is yet more proof that as Unity matures it is better able to address the needs of its users.

It’s uncertain whether this specific feature will land in Ubuntu 12.04 but that the feature is planned will be good news to those who find global menus a pain in the proverbial rear.

But it’s not the only change being planned. A visual refresh of the GNOME System Settings that aims to bring the app ‘in line with the Unity look and feel’ is also on the drawing board (as the official design mock-ups below show). 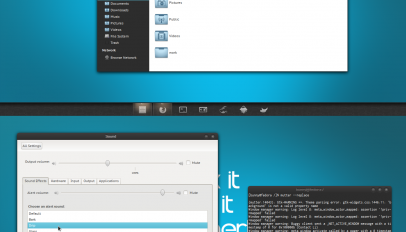