It might sound like the sequel to a film you never knew existed, but after five long years in the wilderness open-source screenwriting software ‘Blyte’ is back from the dead.

Yes, after five long years of no development, the film-making friendly tool has been unexpectedly resurrected like many a film franchise. Now called Trelby the app has a new developer at its helm and a new release ready for download.

Blyte, as it was then known, was open sourced in 2006 after disappointing sales of the commercial application dissuaded the developer from continuing work on it. This gesture, it was hoped at the time, would see the Blyte updated and maintained by the community.

Sadly no-one picked up the coding mantel, and so the application wandered off into the dusty desert of forgotten-about-ware…

There are a dearth of decent screenwriting applications available for Linux. As a film-maker myself I’m all to aware of this.

The popular – and feature-filled – OS X application Scrivener has been dancing with the thought of an official Linux release for over a year. But it appears that this rumba is running out of steam, and the Scrivener builds for Ubuntu are now classed as ‘unofficially supported’.

Celtx meanwhile is as feature-filled as Scrivener but, much like it, is designed for a multitude of purposes. The result is a cluttered UI that can often get in the way of being creative rather than assisting in it.

So what are the benefits of using Trelby? Let’s take a quick look…

Arguably the most important part of a screenwriting application is the ability to write and format screenplays with ease. 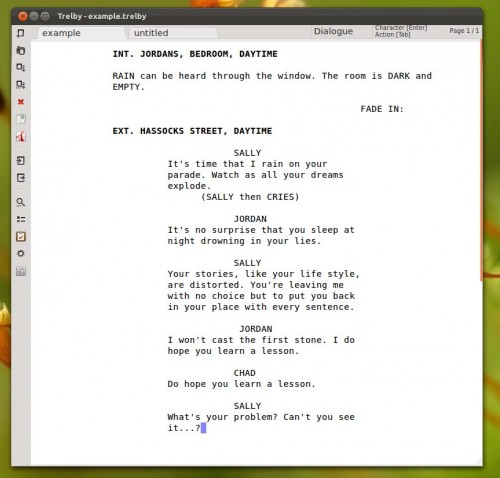 As someone easily distracted by the most trivial of things the first thing I look for in any editor of any form is a full-screen mode.

Trelby’s full-screen mode is new to this release and, for the most part, is as clean and uncluttered as it needs to be. An option to switch off the tab/hint bar at the top wouldn’t be a bad future addition, mind. 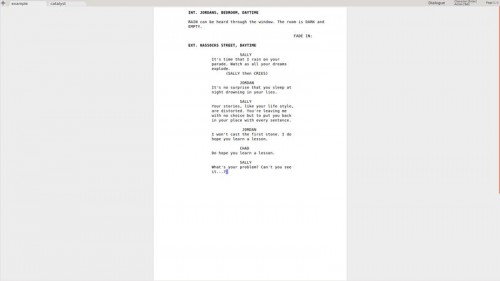 Other views available include ‘Draft’, ‘Layout’ and ‘WYSIWYG’.

The latest releases of Trelby can be downloaded from the official website @ trelby.org.

Downloads are provided in easy-to-install .Deb packages. Just download, double-click on the package and follow the prompts in the Ubuntu Software Centre.