A brand new way of using application menus in Unity interface is coming to Ubuntu.

HUD – Heads UP Display – uses an intelligent search-based approach to finding and accessing menu items you need. It’s smart too; HUD is capable of remembering what items you use most often and prioritising them in the results.

The goal is to make finding menu items faster, in turn speeding up your workflow. From the video demo of HUD embedded below, the feature certainly has the potential to do that – and a whole lot more.

The announcement of HUD goes some way to explaining the more “controversial” decisions made with-regards to Ubuntu’s Application Menus over recent releases.

We were keen to learn more about HUD; its genesis, design and purpose so we grabbed a chat with John Lea who leads the Ubuntu Desktop and TV design team.

For those of our readers who don’t know what this new feature is, what is it?

A new way of interacting with applications!

Instead of hunting through menus to find a command, just type what you want (express your intent) and let the HUD show you exactly what you need. We see this as the future replacement for the traditional application menu, and it will be a major area of research and development for us and the community in the coming four releases of Ubuntu.

Basically rather than navigating menus to find an application function, just tap ALT and type what you want the application to do.

Some fuzzy logic matches what you typed with the application menus, and the most relevant commands are displayed. To complete the action just press return, or select one of the alternative functions presented in the auto-complete.

The HUD also remembers your interactions with each application over the last 30 days, and uses this information to learn your likely behavior and adapt the results prioritising the functions most relevant to *you*. 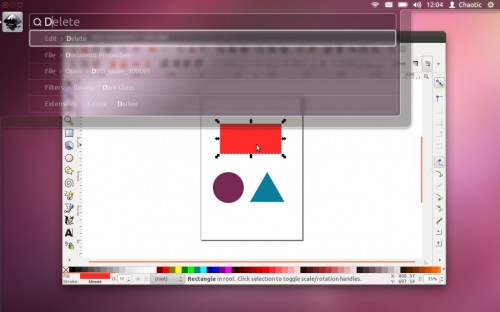 What types of use cases do you have for the feature?

Currently the HUD provides a fast and efficient way to complete any journey that involves using an application menu. It also assists in making functionality more discoverable; just type what you want to do and the HUD will match and display the available options, even if some of those options are normally hidden in a sub-sub-menu.

The applicability of this new feature is very wide; it will provide a new way of working with any application that is compatible with the Ubuntu global menu.

What design persona did you create this feature for?

We have a range of personas, mapping to different kinds of user of Ubuntu. Initially the HUD started as a power user feature, aimed at improving the experience of tech-savvy users who make full use of applications but use too many apps (and adopt new apps too quickly) to remember every shortcut key.

As the design progressed and developed, we expanded the scope of the design conversation to embrace all of our personas.  We noticed in testing that new users found the HUD faster than the old menu, as did power users who hadn’t memorised the shortcut for a given function.

Search driven interfaces have come to dominate the web, and we think the factors that made this design pattern so successful on the web also apply to the desktop. When using a desktop people are accustomed to navigating a hierarchy rather then typing (or saying) what they want, but the shift to intent-driven navigation is a very natural one.

We are providing the tools to make search driven desktop interactions a reality, and pioneering a set of interaction patterns that provide simple, easy to use, and discoverable access to an extraordinary depth of functionality.

What were the design considerations that went into the feature?

We asked ourselves “how can we use the intelligence of the computer in order to minimize the mental work imposed on the user when they try to complete a task”.

We’re interested in how we can make a user’s life easier by allowing them to spend more time focusing on what they are actually trying to do, and less time thinking about how they need to interact with the computer in order to do it.

During the design process we emphasised the need for the solution to be fast, simple, and intuitive. The key balance was how minimal we could make the design in order to get out of the user’s way and let them focus on their task while also providing all needed information and functions.

But we are applying a high quality bar to all new features and the existing Unity code-base, and this feature will not be granted any special quality exceptions. It will certainly be available as an optional add-on, and even if it lands, it will not yet completely replace the menu, you can use the menu in the normal way or start playing with the HUD.

Where do you see the future of this feature? How will it evolve?

Ultimately the HUD will be combined with speech recognition, creating an environment where vocal commands are used in parallel with mouse, keyboard and touch interaction.

We want to lead the widening of human-computer interaction bandwidth, and we envision a world where a user speaks to their computer while simultaneously directing focus with a mouse (or other pointer) and sometimes reaching up and touching the screen to directly manipulate an object.

Additional methods of interacting with a computer are very much complementary, in the same manner that human to human communication can utilise a mixture of speech, expression, gesticulation, drawing and writing.

There is a long and interesting journey to travel before we reach this destination. The HUD is just the first step, and we have a good map of what we need to do in order to get there.

With thanks to John Lea