First off, let me say that I am a guest poster and my opinions do not represent those of Ohso or any others writers here at OMG! Ubuntu!

With all the Unity less-than-loving going around I decided to spend some time with the latest release candidate of Ubuntu-based distribution Linux Mint 12.

This release, which is based on Ubuntu 11.10 and GNOME 3, is near to completion, but as with all things of a development nature take with everything with a grain of salt because it could still change. 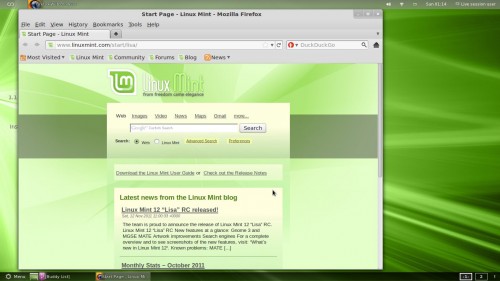 I’ve been hearing about Linux Mint for several months, where it’s touted as a great replacement if you’re dissatisfied with Ubuntu.

But it never quite caught with me

Yes, it comes with a bunch of codecs installed by default, and that makes it easier to run out of the box, but I understand why Ubuntu cannot do that and accept it. I suppose that’s why it’s taken me so long to ever test Mint.

More recently, Linux Mint has been making waves within the news for its support of the GNOME 2 fork ‘Mate‘ and its custom version of the GNOME 3 interface. We’ll come back around to that in a moment, though.

First experience with Mint has not been in its favor.

I’m a fan of the concept album, where every song in an album is a part of a cohesive whole. Even when this is poorly executed, you can tell there was some sort of plan for the release. But Mint? It seems to have no plan.

Instead, Mint is the Best Of album; the one where they throw all the things that people go crazy for together with no regard for how the pieces of the puzzle fit together.

The Power Ballad of Linux

This extends to the application selection where, after install, I was greeted by FOUR different media players.

I know you bring us codecs, but is it necessary to give a separate media player for each of those codecs? Banshee, Mplayer, Totem, and VLC all make a showing. To be fair, I’ll remove Banshee from that list, leaving three.

To come back to the album comparison: everyone remembers at least one power ballad and will sing along to their favorite. But starring them side by side can get tiring. I’m not even sure which to use. At one point, I just played the same movie in all four applications just to see if I was not imagining it.

There is, however, no denying that these applications have huge fanbases in the Linux community as can be evidenced by even the cross-section of said community that visits OMG! Ubuntu!

The visuals combine Faenza, GNOME icons, GNOME 3’s default ‘Adwaita’ theme, the elementary theme and large smatterings of the colour green. The result is not flattering.

Now, I’m quite the proponent of a new icon theme for Ubuntu, but I don’t want to see if half-implemented. If your distribution is looking to change up the visuals, the fall back if there is an icon missing cannot be so different as Faenza and GNOME icons. It is incoherent and lacks that sense of foresight.

Again, I found myself feeling like it was just some person who went on the comments here and said, “Oh, they want this and this, design done.”

You buy the album (CD, I know, I am such a Luddite) and it comes with a neat bonus download for the MP3 version. Pop the CD in and decide to rip some FLAC files from it, leave and come back to find not only your FLACs that you asked for but also a duplicate set of MP3s.

The GNOME 3 transition has been a difficult one for all distributions not named Fedora. Ubuntu has handled itself well enough for my tastes, but still has its laundry list of issues. Mint tries to sidestep these by going with Shell and opting to create their own modified version that somewhat duplicates their old stylized single GNOME panel at the bottom. 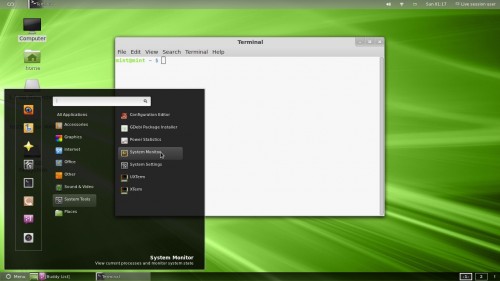 It seemed everything in Mint’s interface was duplicated somewhere else: I had two workspace switchers; Two quick launch docks (both hidden from view); Two Application selectors; Two– I think you get the picture.

The level of duplication makes me hope that this release is simply Mint’s transitionary period, where, next release, they will hit hard and axe the redundancy.

My Problem with Best Of….

I’ll come right forward with it and say that it is that you inherit all the original problems and then double them.

If I had a problem with an album, do I really want it to make a return on a new format? This song kind of had a fringe appeal, why is it here? Why is there no coherence to the lyrics?

I just can’t escape that point. Mint has a lot of promise, but is lost in the community. It’s taking so much varied direction that it has become amorphous. I am not entirely sure of where it is heading, and I want to keep an eye on it, but I am not sure it will be worth it yet.

Mint clearly isn’t my favorite cup of tea. But I did find one thing interesting: Some of those greatest hits weren’t actually the original, they were covers. I didn’t find a rebranded Ubuntu Software Center, I found a generic one that lacks coherency (much like Ubuntu’s does with all its other applications). I didn’t even find Update Manager. 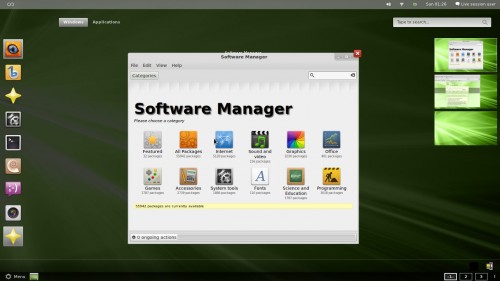 The reason I mention these things though is because while it isn’t for me, Mint will have its fans out there.

I say all these things not out of hate, but of dissatisfaction. I had high expectations for Mint and was left wanting from the very get-go. I’ll always keep an open ear for news on Mint if it floats my way, but that first impression is irrevocably lost.

Perhaps another listen in a couple of years when Mint stops doing the best of and finally creates their own sound to get down to.