There was a time when I, like many, covered my Linux desktop in all manner of Screenlets, gDesklets and widgets. I grew out of this, but ‘PlexyDesk‘ – a new widget-toting project, may just light those creative fires on my desktop once more… 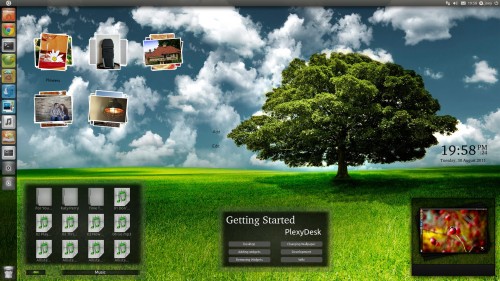 So what is it?

PlexyDesk is a Qt/QML powered widget space that ‘covers’ the default desktop space with an alternative that, according to its developers, lets you ‘efficiently use your desktop background.’

The app is cross-platform (Windows, OS X and Linux) and works under most desktop environments, such as KDE, GNOME 2, GNOME 3/Shell and Ubuntu Unity.

What can it do?

With the “app” currently in active development there’s not an awful lot to play with just yet, but what is there is more than promising with: –

For the more technically interested PlexyDesk has an ‘API for writing data models and C++ widget plugins’ and GLSL shader support.

Plexy isn’t yet complete or stable but the current snapshot feels quite robust, not crashing once during my play with it. Widgets can be freely moved around the desktop although, somewhat annoyingly, none of these can be removed (nor can extra ones added manually.)

You can sort of “hide” widgets by double clicking on them, upon which they turn into a semi-transparent square. 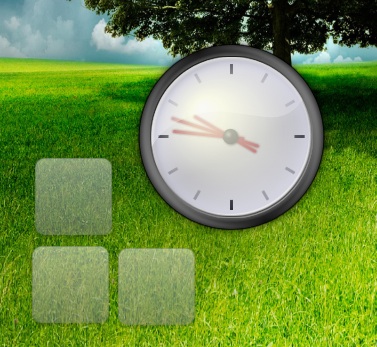 The ease of changing background is nifty, as are the different themes some widgets (such as the clock) have when right-clicked on.

Negatives: the ‘File’ widget is a bit slow and cumbersome to navigate, and certainly fails to beat a scatting of icons on the desktop or a smack of the ‘Super’ button to call up the Unity Dash for intuitiveness, and the lack of variety in the widgets will limit the usefulness of PlexyDesk as a replacement for the most ardent of widget fans.

Some extra widgets (many half finished) are available in ‘/usr/share/plexy/themepack/default’. Adding these to the desktop is a matter of dragging and dropping the relevant .qml file from within the relevant folder on to the desktop.

How to Install Plexydesk in Ubuntu

A daily build PPA – which is unstable and unsuitable for users dependent on Ubuntu running smoothly – provides packages for Ubuntu 10.10, 11.04 and 11.10 users. This PPA only contains one package – PlexyDesk – but does pull in a number of Qt dependencies from the main Ubuntu repositories.

To install PlexyDesk in Ubuntu add the following PPA to your Software Sources, update and then install ‘plexydesk’ from the Ubuntu Software Centre: –

Tetris Meets Physics In This Crazy New Version
Read Next