Is your desktop in need of a makeover? The following desktop by DeviantArtist ~votritis, called ‘Stairway to heaven’, might be just what you’re after… Whilst the ‘entire’ desktop set-up pictured above is, evidently, not using Unity or GNOME-Shell, the various elements that make it up can be used on their own.

The wallpaper, conky theme and CoverGloobus theme all look just as striking in Ubuntu 11.04 Unity as they do in the ‘classic’ Ubuntu session. 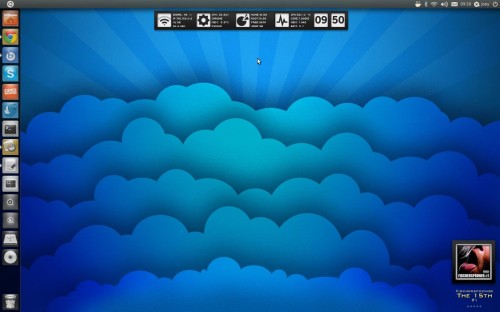 Of particular applause is the the ‘Reloj’ Conky theme, which in the screenshots above is styled as a bar at the top. It can be used in three different formats: –

As an aside, if you’re in Ubuntu 10.04 or 10.10 and using the ‘classic’ GNOME set-up – but don’t want to fiddle around with AWN try ‘Adeskbar’ – it matches the style of the Conky theme perfectly.

OstroLk In some countries in Europe, one can return any goods…
"Every Preference Has a Cost" — Why GNOME Removes Features