We’ve written about several tools that makde creating Qrcodes – ‘two-dimensional barcodes made up of black squares on a white background – in Ubuntu easy, but the following tool, QtQr, beats them all hands down.

You can use your webcam to decode a QrCode (for example, one you find in a magazine) or you can used a saved Qrcode image. 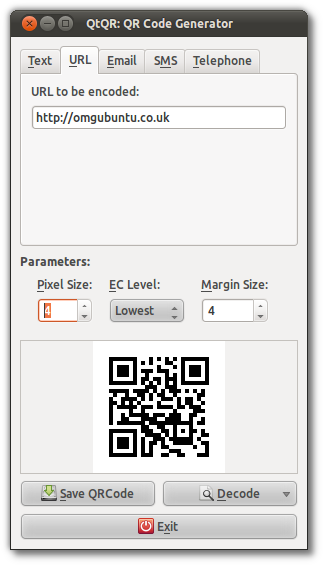 For example: I saved the ‘QrCode’ from our Android Application announcment post to my desktop, opened QtQr and selected it for decoding. A split second later a pop-up told me what it contained: –

You can try it yourself by installing the app from the application’s stable PPA.

Add ‘ppa:qr-tools-developers/qr-tools-stable‘ to your Software Sources, update and then search for and install ‘QtQr’ via the Ubuntu Software Centre.

The code is also available on Launchpad @ launchpad.net/qr-tools