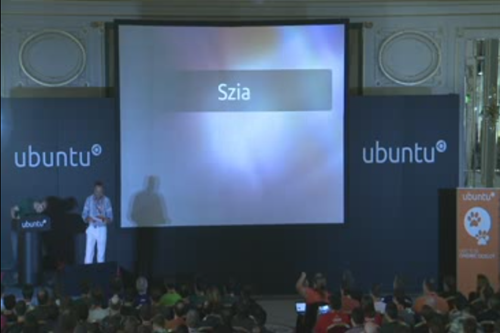 Backed by the default Ubuntu wallpaper and flanked by cute ‘paw’ logos, Ubuntu’s founder Mark Shuttleworth delivered a powerful and honest keynote address to the attendees of the Ubuntu Developer Summit 2011, held in Budapest, Hungary.

“First of all I want to say thank you. The whole community deserves a thunderous round of applause for what we achieved in Natty” he began before going on to highlight the “difficult and challenging” Ubuntu 11.04 development cycle, calling it a ‘profoundly challenging cycle’.

“Our work is not yet done, but we achieved much of what we set out to do.”

“It’s perfectly normally for debate and questions around transitions like the one we made in Natty.” he said whilst mentioning that he himself was not above criticism, calling Unity a project that he is ‘very close to’, making him cautious that his judgement is ‘not coloured’. “I have no problem with being challenged [or] questioned.”

But its strong vision that is making Ubuntu stronger.

“I think we’ve set a new bar for disciplined design in free software.” he said. “For actually going through a vigorous design process, testing work against users actual experience of that, testing our assumptions, iterating based on that testing, and ultimately shooting for the stars.”

‘We’re starting to see real leadership and innovation here in the Ubuntu community. My view on this, and it’s just one view, is that we’re [Ubuntu developers, are] in the crucible: We see what users experience; we’re the conduit; we’re the place where the software lands in users hands. This gives us a unique perspective and gives us responsibility to take some ownership in experience that users have.’

And getting there will rely on users and developers alike trusting in the decisions made, for whilst governance should be open and transparent it is also important to trust the desktop team to be fully capable of making desktop decisions, the server team to make server decisions, etc.

“If you’re stressed by decisions that have been taken then ask yourself: [are these] the people who should be taking the decisions?”

In an honest move Mark addressed the controversy and heated debates some of the decisions taken during the Unity cycle had caused – even going as far to say that he had ‘failed as a leader’ on the issue of Contributor Software agreements specifically.