Controlling Banshee on the Ubuntu desktop is easy using the Sound Menu – but Unity Quicklists are even faster.

OMG! reader Nico, who earlier this week showed us how to add an unread message count to Pidgin on the Unity Launcher, mailed in a pre-made Banshee Quicklist for Ubuntu 11.04. Once installed a wide selection of handy actions are no-more than a right-click away… 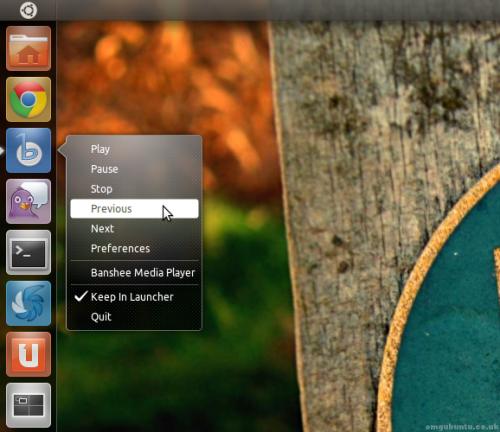 Shouldn’t Banshee have this by default?

You wouldn’t be alone in thinking that. A bug on Banshee’s lack of ‘quicklist’ options has already been reported (bug #764321) so this feature should hopefully turn up in Banshee in the not-so-distant future.

How to add a quicklist to the Banshee launcher in Ubuntu 11.04

Download the required banshee.desktop file containing the nifty actions from db.tt/uRcDDaH. Move this to your home folder.

Next Press ALT+F2 to reveal the Unity Command area, where you need to enter the following command carefully

Hit ‘Enter/Return/ and enter your user password when prompted.

Drag the ‘banshee.desktop’ file you placed on your desktop earlier into the new folder window that opens. Upon doing this you should be prompted to ‘Replace file Banshee?’

Log out and back in and, should things have gone to plan, right-clicking on Banshee will now display the Unity Quicklist as pictured atop this post.

Many thanks to Nico

Danial Behzadi You can check the actual source code in Debian Salsa.…
Googleâ€™s Flutter SDK Can Now Be Used to Make Linux Apps

Danial Behzadi I don't know about RHEL, but in Debian you can…
Googleâ€™s Flutter SDK Can Now Be Used to Make Linux Apps

Per-Annum Bayenhold Why do you even care about Linux?
Googleâ€™s Flutter SDK Can Now Be Used to Make Linux Apps