In such a short time of development, improvements in speed, aesthetics, usability and more have come to life in the Compiz version of Unity. But, what about customization?  “If you have no will to change it, you have no right to criticize it”, a wise man once said.

The purpose here is not to teach you in detail how to customize the various options, but rather to just show you where they are and that they do exist. As for creating a style, that’s up to your creativity!

Considered by many as the “killer app” on linux, theming returned to Ubuntu on February 17, 2011. Tweakers rejoice! The theme applies to the panels and everything else like it used to. The icons of the launcher now adheres to your chosen icon set as well. Cool.

The icons in the launcher can be moved around or completely removed as well.

The options to choose between ‘Blink’ or ‘Pulse’ animations on launching apps and apps demanding attention is available. Optionally both can be set to ‘None’. The transparency of the panel can be chosen along with the size of the launcher. Personally I set the panel a bit smaller for use on my netbook and made my panel slightly transparent because it looks sexy.

Put your own twist to your Workspaces

As I read through the comments of some users from different posts, many thought that the gray reflexion area when the Workspace Switcher is activated is too large. Although being a mandatory Icon in Unity, it does not mean users can’t change it up. Simply open Compiz Config, go to the Expo settings and there you go! Change every detail you can think of.

Here is my end result: 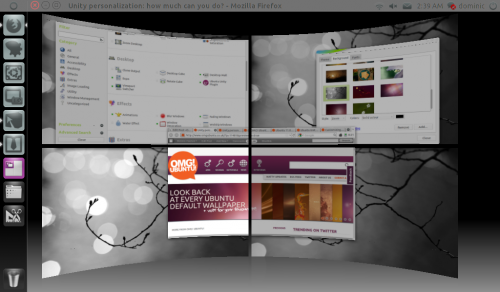 In 11.04,2 lenses are included (previously named places). The Files Lens and the Applications Lens. Where it gets interesting is that you can create and add lenses to the shell as you please. Still in early stages of implementation, lenses add a depth of customization never before seen. Many hope once there is enough lenses out there that they will be easily available from the Software Center. Here are some great ideas from some of you awesome readers:

And so much more!

A lot of people seem to forget that nearly all the personalization from Classic Ubuntu can still be used with Unity. Screenlets are back in development and work just fine with the new Desktop Ubuntu. The much loved Faenza Icons & Nautilus-Elementary can still rock out Natty. The almighty Compiz Fusion is in full force with all of it’s power too.

Like what you see? We would love to see how you readers can personalize Natty! Post images in the comments bellow.

Editorial How To compiz customization Unity

Home » Editorial » Unity personalization: how much can you really do?

Kaya @d0od:disqus Did you use screenshots from different times? The first…
GNOME 42 Alpha Arrives With a Lot of GTK4 Ports

Guy Clark Many Linux gamers would disagree. Wine makes up a good…
Wine 7.0 Released with Tons of Improvements, Including a New Theme

Bertrand The point is the default workflow here. And the very…
GNOME Mulls ‘Cleanup’ of Background Settings in Pursuit of New Features