Later today Mozilla will release the long awaited Firefox 4. This new version of Firefox boasts that it’s faster and simpler to use, as well as introducing a few new features, most notably, Firefox Sync.

But is it good enough to compete with Google Chrome?

Mozilla Firefox has for many years been the browser to challenge Microsoft’s Internet Explorer, with an aim to build a better web.

Until recently, Mozilla had created a browser which was widely adopted by the tech-savy due to its speed, add-on support and web compliance. Since 2008, Google Chrome has been slowly eating away at IE and Firefox’s market share, thanks to its sleek interface, lighting speed and fast development cycle.

Firefox 4 marks a change within Mozilla to speed up their development cycle and release a new iteration every 16 weeks. Firefox 4 has been in development since early last year, with an aim to provide a snappy browsing experience with widespread support for new web standards.

The first thing to notice about Firefox’s new interface is how deeply integrated the browser looks in Windows, Mac and Linux. Firefox 4 looks especially native in Ubuntu, being the only mainstream browser to support the Ambiance and Radiance themes.

Following Chrome’s design ideas to put all menu items in a single menu button (the “wrench”), Firefox has implemented a similar menu button, but unfortunately it is poorly done. It’s difficult to manage, and many users will likely switch back to the good old menu bar.

The “stop,” “refresh,” and “go” actions have also been combined into a single button, placed on the right side of the address bar. All of these changes make for a radically different user interface compared with past Firefox versions.

Even though many regard WebKit as the superior rendering engine, which both Chrome and Safari are based on, Mozilla is still sticking with Gecko. Firefox 4 is based on the Gecko 2.0 engine, bringing with it a new JavaScript engine called JagerMonkey.

Firefox 3.x JavaScript was considerably outdone by Chrome, but finally it is on par with Google’s browser. Page loading is much improved, and in my everyday, non-scientific tests I believe it to be a faster browser than Chrome. Although Firefox still appears to suffer from poor browser launch times in Ubuntu at least.

In the past few months, Hardware Accelerated applications have been increasingly popular, with Adobe Flash 10.2 supporting GPU rendering and Adobe Photoshop using OpenCL. Finally, web browsers are starting to implement this new technology and this is an area where Mozilla has the competition beat for now.

Firefox 4 boasts hardware acceleration enabled by default across Windows using Direct2D, and Mac and Linux using OpenGL. This new technology moves some of the processing off the CPU and onto the GPU, which should allow pages to render faster.

Among the cross platform browsers, Google Chrome’s hardware acceleration is disabled by default and is only supported on Windows, while Opera has yet to support this new technology.

Firefox has always supported the latest web technologies, and there is no change in Firefox 4. Support for HTML5 and CSS3 has been improved. New support has been added for WebGL, which provides 3D animation within the web browser. Google’s new open video format, WebM, is also now supported in Firefox.

The web standard improvements can be seen easily by running Firefox 4 through everyone’s favorite Acid3 tests. Since Chrome 4, a perfect 100 was achieved in ever release of Google’s browser.

Firefox 3.6 scored 94/100, and some improvements have been seen with Firefox 4 scoring 97/100, but it’s still not that 100% web standards compliant score that Chrome manages to achieve.

Firefox 4 does not bring many new features as such, remembering that Firefox already had many of the features found in modern web browsers.

Mozilla’s major new feature is Firefox Sync. Chrome and Opera have had this for a while, and it basically backs up and syncs your bookmarks, history, settings and passwords between all your devices which use Firefox.

Firefox Sync works well, but it is very poorly thought out and implemented. While Google Chrome Sync allows you to keep adding devices to your sync account, and all the data is propagated between all your active Chrome browsers, Firefox sync requires some unnecessary management.

Users are required to setup a main Firefox device which all data is controlled from, and where devices pull and update data to. Firefox Sync requires devices to deactivate themselves if they’re not used anymore, which can be annoying for reinstalls of the operating system.

To add even more complexity to Firefox Sync, all data is encrypted, which means the user is expected to deal with encryption keys!

As Firefox Sync stands now, Google Chrome provides a far easier way to Sync data, as it works like Dropbox where only one version of data is synced or backed up.

Other new features include…

Although Firefox is very feature-rich, it is lacking one of Chrome’s biggest advantages of tab processing, where each tab runs as its own process.

Firefox 4 still suffers from the issue where one rogue tab could take down the whole browser, which you could argue makes it less stable than Chrome.

Firefox 4 is an excellent web browser, and a good leap forward from its 3.x.x era. Mozilla’s attempts to compete with Google Chrome had been poor up until this point. Now with a nice new interface and the speed to match Chrome, Firefox is finally a worthy competitor.

Although still suffers in some areas, mainly in a very poor implementation of its browser syncing feature and the lack of independent tab processes, with a faster development cycle we should expect great things from Mozilla in 2011 and Firefox 4 is just the start of this new offensive.

If you were previously a fan of the fox, it maybe time to take a look at version 4, and make the switch back to Firefox. 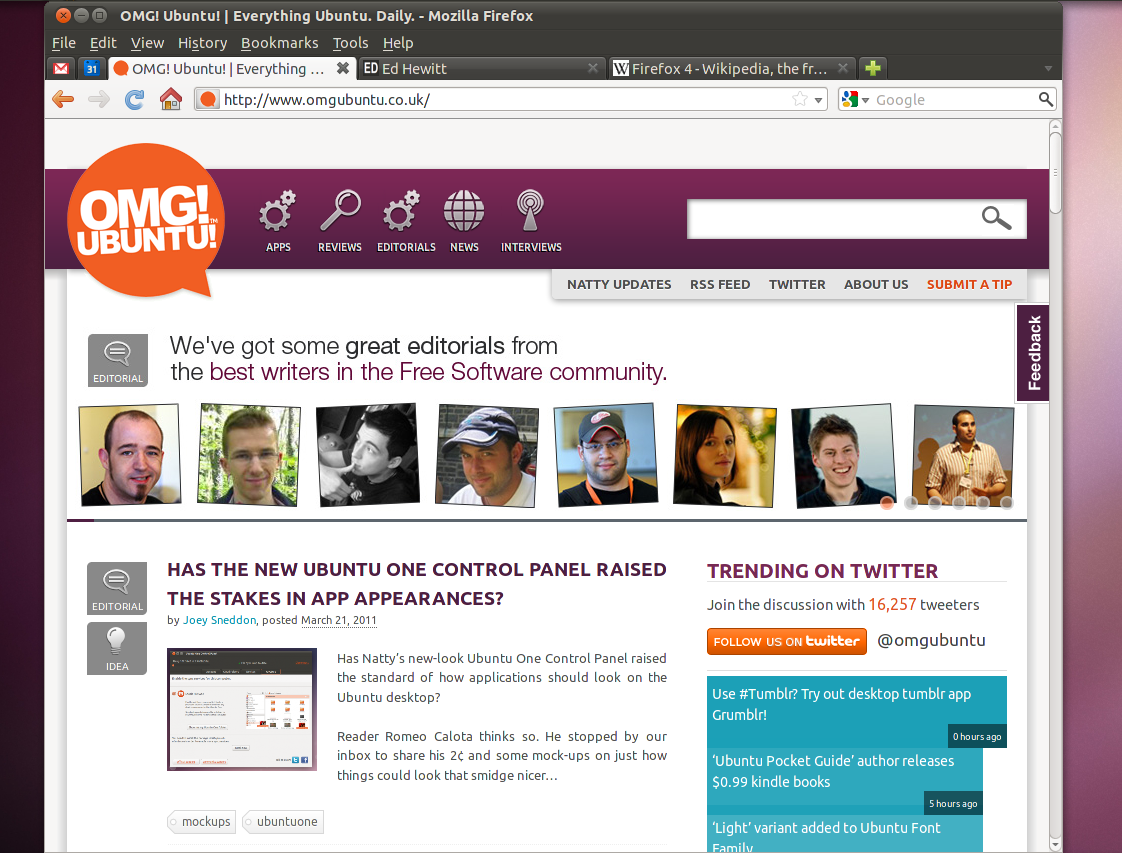