The first post-release application to be approved by the Application Review Board is now  available to install from the Ubuntu 10.10 Software Centre.

The ‘Application Review Board’ process is an initiative set up to facilitate the inclusion of applications in Ubuntu post-release.

The game, called ‘Suspended Sentence’ and described as a free "point-and-click adventure game set on a space ship", was created for ‘PyWeek‘ – a contest in which teams or individuals are challenged to create a whole new game from scratch in one week. 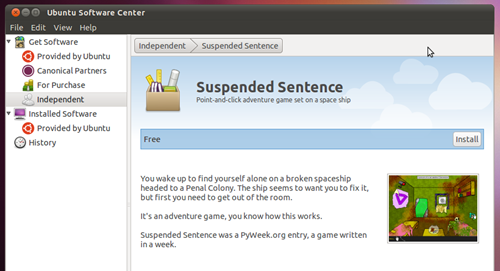 ‘Suspended Sentence’ is available to install in Ubuntu 10.10 under the ‘Independent’ category. It joins previously available application ‘Daily Journal’.