A new plug-in for Totem movie player allows the app to receive and play AirPlay-streamed video. 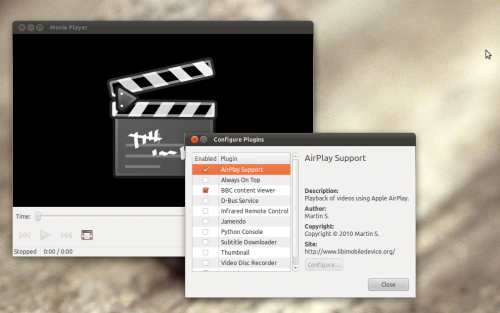 AirPlay is a proprietary service from Apple ‘which allows a computer, iPhone, iPod, or iPad with the iTunes music player or iOS 4.2 to send a stream of music, video, or photos to multiple devices such as an AirPort Express, Apple TV or other AirPlay enabled device.’

Ubuntu One announced support for streaming music using AirPlay via the official Ubuntu One client for iPhone late last year.

The plugin is hosted on the sukimashita.com git repositories located here.

Install by first cloning the repository

then moving the files into

creating directories where needed. Finally enable the plugin through the Totem Plugin menu.

Derek Bolthausen well, you wrote an article on something you didn't try?…
Ubuntu is Working on Improvements to Fingerprint Login

Med Medin For me with more than 80 apps installed, the full…
How to Reset the Apps Grid in GNOME 3.38

Johann Popper People complained they couldn't customize the alphabetical Gnome appgrid, now…
How to Reset the Apps Grid in GNOME 3.38

Med Medin KDE menus (both kicker and kickoff) are much more intelligent…
How to Reset the Apps Grid in GNOME 3.38

Von Goofy Didn't some guy installed Windows on new Mac, and it…
Linux Support for Apple Silicon is Getting Underway