When using my netbook I loathe having to use Empathy – or any instant messenger for that matter. But why?

Windows. No not that sort but the sort that litter up our desktops, get in the way of what we’re actually trying to do and otherwise just loiter around, occasionally jostling for attention.

On a netbook with such a small screen footprint the last thing you want to play is application jenga when trying to do something.

Not so Instant Messengers

Empathy bugs me more than most. Chrome? One window. Banshee? One window, Abiword? One Window.

Empathy? Two windows at a minimum – a ‘buddy list’ and a ‘conversation’ window.

Where things get annoying for me on a netbook is when wanting to start a new conversation: I have to minimize my current conversation in order to re-call the buddy list, double click on the contact to start a conversation and then switch back to my full screen convo window.

It doesn’t sound like a hassle – and to be honest I guess it isn’t – but when multitasking it drives me insane.

Thanks to a combination of snow, sub-zero temperatures outside and far too much coffee in my system I’ve made a quick mock-up (emphasis on the quick here) of what such an application might look like running in Unity (hence no menu bar). 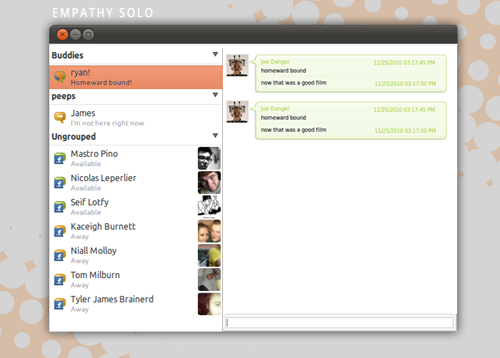 The buddy list and conversation window are fused together resulting in a ‘one window app’. This optimizes space, reduces duplicate menu entries and, for netbooks and tablets, enhances navigation: no more swapping between windows to start, stop or carry on a conversation.

People are tabs = chatting is easy

Instead of tabs running along the top of the conversation window the buddy list becomes the ‘tab’ bar; Instigating a chat with someone is as simple as clicking on their name and typing.

Someone sending you a message? Just click on their name and chat,

Do I really need to see people I can’t talk to by default? No. It makes me confused, it means I need to pay attention and, above all else, it’s pretty pointless.

If i need to get in contact with someone who isn’t online I’d rather send them an email, tweet or Facebook message than send them an ‘offline’ message via Empathy.

Want to change your status to ‘Busy’ or ‘Offline’? Use the MeMenu -after all  it’s what it was put there for, right?

Seif’s sending me a file. Rather than it getting lost under a sea of floating windows wouldn’t it make more sense for the progress bar to be displayed in the buddy list right under his name?

I think so. That way I can passively keep an eye on it whilst chatting to someone else. 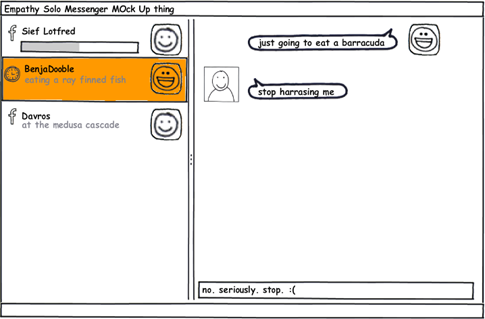 Things I didn’t find a place for/fathom out

Home » Editorial » One Window Empathy: Boy would it simplify my life

‘Ubuntu Light’ available to download from Dell
Read Next