In this guest post, Jason DeRose of Novacut team explains about the design focus for their upcoming video editor.﻿

Being at UDS was inspiring and life changing for the Novacut team. (A big thanks to all the OMG! Ubuntu! readers and everyone who helped us get there!) Particularly inspiring was the summit’s relentless focus on design. So I wanted to share a bit about Novacut design focus, entice designers with some shiny things they could work on were they so inclined.

It’s all about storytelling

The Novacut video editor is focused on one thing… being the best tool for storytelling. So as we begin our design process, we aren’t studying existing video editing software, we’re studying well-told stories and working backwards.

If you watch closely, you’ll notice that modern TV and movies rarely use video transitions (cross-fades and the like). Most of the story is told with many small, precise slices of video placed back-to-back with no gap, no overlap, no transition. There might be a few transitions, but you can probably count them on one hand, whereas the number of individual video slices will easily be in the thousands.

Obviously this is an area where Novacut can innovate, and we intend to. We’re giving this important majority use case two first class operations, which I call Slice and Sequence: 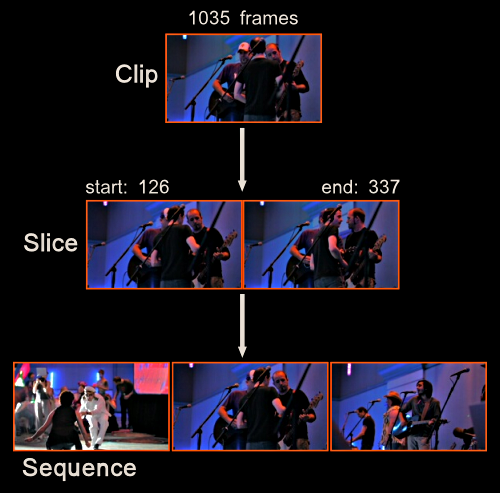 A Slice is from some exact starting frame to some exact ending frame in the input clip. As a slice is a persistent node in the editing graph, you can revise the starting and ending frames at any time.

A Sequence is an ordered list of slices or other sequences. As the sequence members are only ordered (not positioned in time), you can freely revise slices in the sequence without creating gaps or overlaps. You’ll be able to do things like re-order the members in the sequence by dragging them. Or pull a slice out of the sequence, let in hang in space, add it back in later. 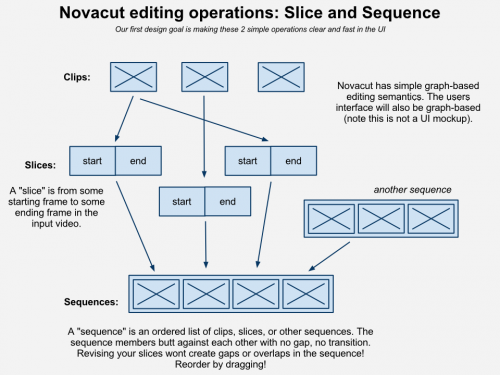 The Novacut editing semantics are graph-based, and the UI will be graph-based as well. Among other things, this gives us an easy way around the single “place you can put stuff” problem. Sometimes editors do need a free-form multi-track timeline, which in Novacut will just be another type of node that you can put stuff in. We can have our cake and eat it too.

A graph-based UI also gives users some powerful yet simple ways of organizing the complexity present in modern editing (including the 2d spacial organization of the graph, an extremely effective way for people to remember where stuff is). Oh, and have I mentioned that Novacut is a distributed video editor that is going to bring to professional video production the agile, distributed workflow we all know and love in the free software community? When you add distributed collaboration into the mix, managing complexity becomes even more important. This is an exciting, challenging, important problem, and free software is going to get there first.

You see, we have no intention of writing a clone of some proprietary pro video editor. Instead, we’re gonna blow a hole in the roof and launch that proverbial bar right into space.

The Novacut project is very design focused, and part of that focus is making sure that it’s easy for great designers to have their way with the Novacut UX. That’s the biggest reason why we’re using HTML5 and WebKit for the UI… its familiar, productive web technology that countless designers already know.

As a platform and infrastructure, we want Novacut to be a playground for design. There’s no reason that the core Novacut components can’t become the foundation for a slew of new distributed content creation tools… that’s one of our goals, after all. Free content creation tools don’t need to play catch up any more. It’s time to lead. And to let everyone in on a little secret, one of the areas we want Novacut to lead in is… multitouch.

So designers, show us what you’ve got, instruct us in building the playground you need in the comments. To see what’s on our radar, look at the dmedia (whose first release is going to see the daylight this Thursday) and Novacut bugs tagged with “design”. We also just created a novacut-design team on Launchpad.

A little help over the hump

We’re still doing this full-time, relying on crowd-funding, our rapidly depleting savings, and credit cards to get by. We’re also actively seeking investors (hint hint), but a little crowd funding will help us play hard to get long enough to find the right investor. We have a longterm commitment to artists, to free software, and to the Creative Commons. It would be a shame for us to get tangled up with an investor who didn’t hold the same values.

If you’re exciting about Novacut and can help us squeak by on crowdfunding a bit longer, we’ll make something shiny with your name on it… a distributed video editor! And its website.

The donation buttons are on our Main Page.

Work on Novacut’s UI is in brainstorming phase and we are looking for your mockups and ideas or some uncleared doubts that you want to clear.

If you have any of those, tell us in the comments or stop by #novacut on Freenode IRC to chat with us.

As promised back then, here are some HD videos of the the UDS All Stars Party.