Bodhi Linux is an Ubuntu-based distribution that supplants the usual desktop environment of GNOME, KDE or XFCE with something lighter – and better looking: the Enlightenment desktop.

Bodhi is based on Ubuntu 10.04, uses the LXDM login manager and the Enlightenment desktop environment. It comes with a minimal selection of pre-installed applications and an even lower set of hardware requirements.

Bodhi is currently available as an Alpha quality release.

Bodhi’s default desktop looks familiar: the top panel contains a main menu button and various applets (or ‘gadgets’ as they’re called in E). The bottom contains a ‘dock’ style bar with application launchers for Firefox, LX-Terminal and the Home folder. 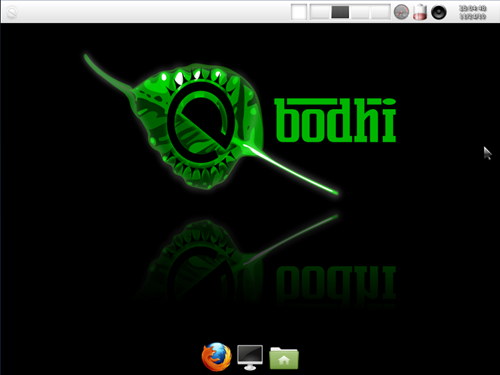 So far it’s all quite standard, right? Well not quite. The Enlightenment Window manager uses desktop effects by default – none of which require much grunt in the way of hardware. These visual touches help Bodhi seem more interactive, tactile and responsive when compared to ‘stock’ desktops on other distros.

Given E17’s relative niche it’s not that surprising to find the default theme lacking in the looks department. It’s by no means awful but by the same token nor is it stunning, either. 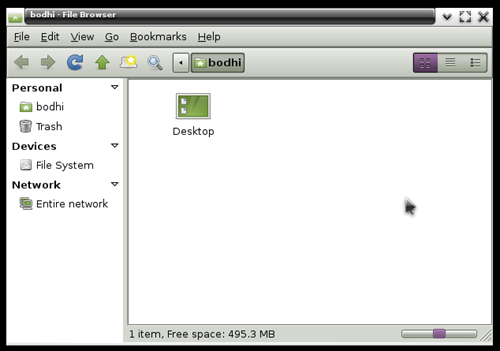 The default wallpaper is incredibly dark with the distro branding bordering on the garish. I quickly downloaded and changed it to something less weighty on the eyes.

Throughout the OS the unusual green and black colour scheme is offset with touches of gloss yet echoes of Windows 95’s default shell.

In fact I do wonder whether the colour scheme was derived from looking at one of these: –

Just like test driving a car you often get a ‘feel’ for an OS within the first few minutes. Thanks to the desktop effects navigating around in Bodhi feels fluid. Effects aren’t laboured despite no dedicated graphics drivers being installed. Applications were quick to launch and respond snappily.

You would be forgiven for thinking that the ‘dock’ at the bottom was also the window switcher. Not so; windows are minimized and maximized via the top bar (Image below).

Very few applications are pre-installed with Bodhi. Firefox 3.6.x is the default browser and comes with a green ‘persona’ theme installed. LXDE’s terminal grants you your terminal access and, well, that’s really it.

Synaptic Package manger is never more than a click away (literally) for installing your favorite applications, however. I think this minimal approach works well: Bodhi is clean for you to make it whatever you want.

On a side note, not being overly familiar with Enlightenment, I find its ‘modular’ nature refreshing; you can pretty much load and unload every part of it: – 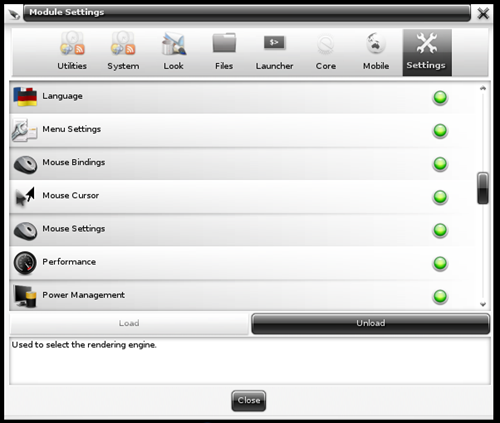 I found a few issues repeatedly bugging me during my spin with Bodhi: –

In all Bodhi works incredibly well – even on low hardware. At times it does remind one of an overly excitable KDE3 but the ‘minimal’ nature of the base install means that potentially it can be anything you want it to.

What e-mail app do you use? Poll results
Read Next