Screencasting made simple is the ethos behind Linux screen-recording tool ‘Kazam‘ and the latest release sees it hammer home this point with improved features and a slew of bug fixes. 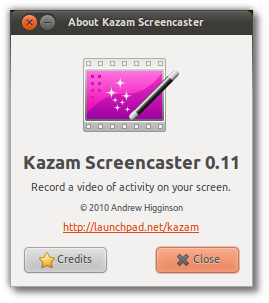 So lets get down to the specifics of what’s new in the 0.11 release: –

The biggest improvement in Kazam 0.11 doesn’t come in the shape of new features, as welcome as they are, but in the big improvements to overall stability.

Amongst the 28 bugs fixed in this release are: –

If you have previously tried Kazam and experienced issues then this latest release marks the perfect point at which to get reacquainted.

Kazam has two PPA’s for easy installation and upgrading.

Both PPA’s support Ubuntu 10.04 and 10.10 and can be added by entering the following commands into a Terminal: –

If you want to help improve Kazam Screencast you can find the project page @ launchpad.net/kazam

*Kazam records at your desktop resolution uncompressed, and outputs in h264 and flac at 44.1khz in the mkv container, fact fans. Thanks Michael.