The Ubuntu Messaging Menu is a fantastic idea: it contains handy ‘launchers’ for supported applications and stores notifications from them until you’re ready to act or respond.

But what about applications that show no-sign of integrating?

Mario Tomljenović sent us the following tip to add custom entries to the menu. Whilst this won’t provide notification support – which is sort of the point of the Messaging Menu – but it’s nevertheless an easy way to insert a simple launcher to a ‘messaging’ application within it.

Say we want to add popular MSN application Emesene to the menu. We need to open Terminal (Applications > Accessories > Terminal) and enter the following command to ‘create’ the menu entry:

Next we we would specify the path to the .desktop file in the text editor:

Save the document and the entry now appears in the Messaging Menu, like so: – 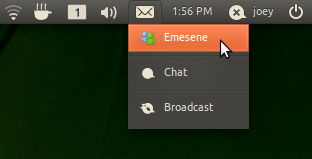 You can add pretty much any application you want to the menu so long as it has a launcher in /usr/share/applications.