If you’re not already aware of Ubuntu 10.10’s new netbook interface, called ‘Unity’, then I would sincerely ask you to point to the rock under which you have been living.

The sexy, stylish and visually impressive interface has made considerable waves amongst users – casual and seasoned – since it was first announced at the Ubuntu Developer Summit back in April. 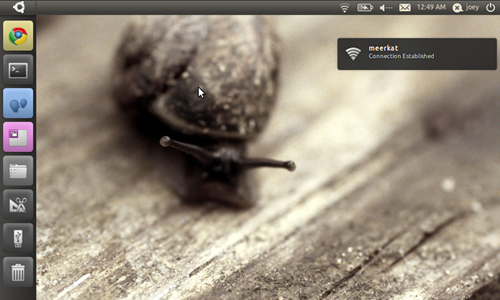 The aim of Unity is simple: maximize screen space on netbooks where screen estate is tight, and, through the use of a new launcher, application menu and file ‘dash’, usher in a more productive and comfortable way of working on these underpowered by oh-so prolific computing devices.

For users not enamoured with the new look that Ubuntu Netbook Edition has been graced with I say relax – the old look launcher will remain installable, just not included by default.

Here’s where the point of this post shuffles in – I’m one of the few users who still have an original 7” screen netbook (EeePC 701 no less) and like many other 701 owners will be upgrading to Maverick when the time comes.

This will bring with it the new ‘Unity’ interface, an interface designed for a higher resolution screen than that of 7 inches so just how well does it fit on a screen that, even by netbook standards today, is considered by many to be too small to be useful?

Ubuntu is fast to boot and arrive at the login screen, but logging in to arrive at the Unity desktop requires a bit more patience. This is largely down to the under-powered nature of the device in question than a slur on Unity itself.

The window manager – Mutter, a more capable evolution of Metacity -  provides some neat visual tricks when opening, closing and minimising windows. It’s no patch on Compiz but it doesn’t need to be.

Unity is designed to maximise vertical space, something many netbooks have a significant lack of. The 7” screen of a 701 is a prime example of this, with only 17.8cm of vertical height to fit your workspace into.

Sadly it’s also lacking in horizontal space too, which makes using the Unity interface somewhat of an annoyance thanks to the ever omni-present left-hand launcher. Were it able to hide (which I do believe is the plan at some point) then this issue will become moot quicker than sudo apt-get install nothing.

The largest challenge in using Unity for an extended period of time and not just a simple poke and coo is in learning what it does and how it does it.

For example the launcher bar does not behave the way you instinctively think it will; it’s not a dock, you can’t click on an icon to minimize and subsequently re-maximize.

Oddly the one part of the entire interface I felt I would have issue with I didn’t. Yes, the “mac style” app menu combined with the placing of window buttons on the panel is a really, really  clever move. If you’re worried about how you’ll adapt to using it  I can only say don’t. It feels incredibly natural – much more than window management using the ‘window picker’ of the current Netbook Edition.

I’ll break this one to you gently: Unity is. Not. That. Themeable.

Well, not yet anyway.

You can change theme, sure, but as this only affects the window controls and not the ‘panel’ or the ‘launcher’ it results in a mish-mash look that will have your cursor hurtling back to click on ‘Ambiance’ to restore a semblance of consistency before you know it. 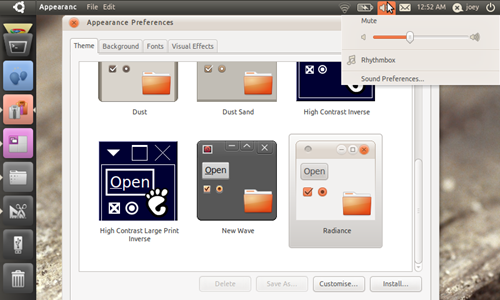 Switching between open windows is a doll: just click on the relevant launchers as you would any taskbar or dock.

If you have a tonne of open app launchers ‘stacked up’ using the pretty ‘accordion’ effect you will soon find using the ‘Overview’ button a much quicker way to switch between applications. Upon click it provides an exposé-like overview of your workspace – neat!

Invoking the Dash instantly brings on a familiar feeling; in many ways it’s like that of the old netbook interfaces with giant category icons just waiting to be tapped into doing something. 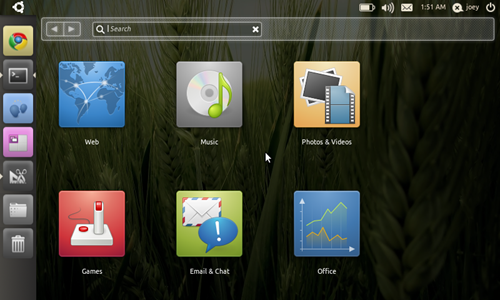 The application and file browser are also fairly reminiscent design-wise of many a netboook interface but with the addition of an integrated search bar is a powerful tool for finding the application/file you’re looking for.

Back to the limits of  Unity on a 7” screen and owners should note that 7” were evidently not in mind when these overlays were designed – in both the application and the file view categories natter off out of the edge of the screen.

This isn’t a massive pain in the you-know-where as the “All” and “Search” functions are able to ensure locating what you’re looking for is a breeze.

It would be foolish of me to gloss over the fact that Unity was, during my week with it, in beta. As such there were many issues  which were/are/will be in the process of resolution. The only “main” issue I can say i experience during my time (that wasn’t the result of my screen size!) revolved neatly around responsiveness. Both the launcher and the Dash were incredibly slow to respond to interaction.

Overall I have to say that using Unity felt far more comfortable than prior “netbook interfaces” on various netbook spins. Despite being designed for screens of 1024×600 and higher there is no major pitfalls when running it on something smaller – as long as you can live with the tight horizontal squeeze the launcher causes.

Unity on the desktop

As a side note I will remind you that Unity, whilst targeted at netbook devices etc, can be installed and used more than comfortably on the desktop too.

The only thing that has the potential to irk after a while is the trudge up top to access to application menu’s – but hey, Mac users have been doing this for years!

Home » Reviews » Uniteee: 7 days with Ubuntu Unity on a 7” screen