Kazam screencasting tool has released it’s first version – and boy am I impressed.

We first introduced Kazam back in June of this year under the title ‘making screencasting tools modern‘. At the time we were immensely impressed with not only the idea but the beautiful execution in design proposed for the application. Sadly the design was just that – a design.

Kazam 0.1 is ready for users to, well, use and whilst it still has a little way to go before it’s the big bad game changer we cited it as it is nonetheless the best screencasting tool available on Linux right now. 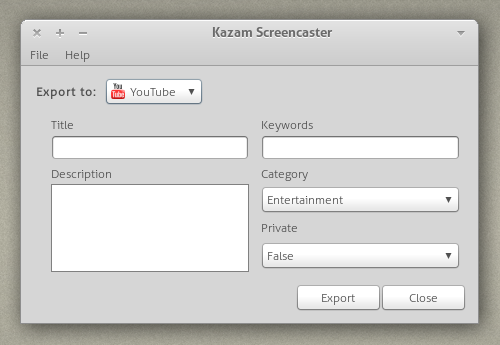 Kazam currently supports both screen & audio capture and export of final file to YouTube and Videobin. It also makes use of an Indicator Applet!

Kazam is early in development so do not expect it to be as refined or as stable as other applications on your desktop. That said if you’re keen to try it out anyway then the following PPA is the one you’re after: –

Once installed Kazam can be launched from the ‘Applications > Sound & Video’ sub-menu.

The developers behind Kazam still have a lot of bases they need cover so if you’re hands are idle do jump in.