Task management application ‘Getting Things GNOME!‘ has just pushed a new version out of the stable door, saddling it with all manner of new plug-ins, UI improvements and 99 firmly squashed bugs. Well done guys! This release is the last on the road to the “full-featured” 0.2 release.

Amongst the new features are: – 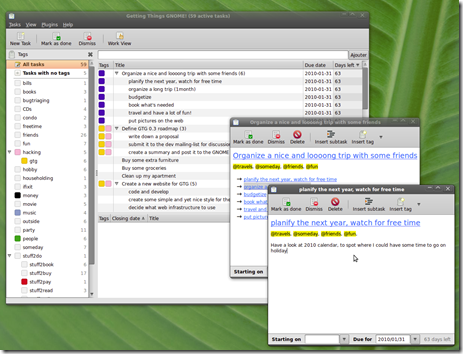 I’m a GTG! user myself and the thought of RTM sync makes me want to kiss several of the developers. …In an uber-manly fashion, of course.

I would love to see some form of CouchDb/UbuntuOne sync happening in future releases, but for now 0.1.9 has more than enough to satisfy!

You can get the latest update to GTG! by adding the following PPA: –

Home » Getting Things GNOME! Gets RTM Sync, geolocation, UI tweaks & much love from me

Emesene Gets A New Preferences Window, Adds Easy Install Of Themes
Read Next