Below is a list of 10 features and changes in Ubuntu 9.10 that you may not already know about… Or even be expecting! 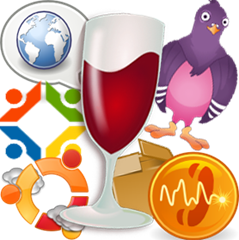 Ekiga ” the VoIP application that nobody uses ” will finally be removed from the default installation. Not only did no-one use it (or anyone know of anyone else who used it), it also took up a considerable amount of disk space for what it was.

It will still be available to install from the repositories if you miss having it sat in your menu doing nothing.

Installing and managing Windows/WINE applications in Ubuntu will become significantly easier in Karmic thanks to a new level of integration between the desktop and WINE.

Around 50% of all Ubuntu users currently install Wine, yet Wine does feel very separate to the rest of the desktop – Double-clicking on .exe files is hit and miss, uninstalling Wine applications often doesn’t work and inserting a CD-ROM or DVD-ROM and hoping for autorun.exe to do it’s thing results in a long wait.

As such, Karmic will see “proper” Wine integration throughout the system. This will range from: –

For the security conscious, ClamAV ” the open source Virus application ” will be installed along with WINE to ensure no rouge malware, viruses, etc are installed.

The Migration Assistant usually found during an Ubuntu installation has been rewritten in Python to allow for greater development and maintainence.

Controversially, it’s also been removed from the actual installer and instead placed under the ‘System‘ menu of the Gnome Panel. This works fine for dual-boots, but if a user is totally replacing Windows with Ubuntu they’ll have no option to get migrate their data unless they boot to the desktop in the live CD first.

It will, however, now feature a greater range of sources to import from, including: –

A New Look For Network Manager

The interface for connection to Wireless networks is also undergoing some changes.

The revisions are designed to do two things:

Below is a in-progress mock up of the direction it’s taking. 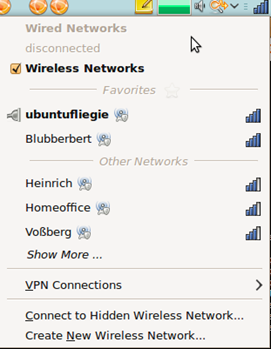 In this re-jigged version, the currently connected network is placed at the top of the available networks list. This a simple, but logical, improvement over the previous listing ordered by name.

The “radio” buttons on each network have been removed and replaced with just one ‘connector’ looking icon for the currently connected network.

Several other improvements are planned, but yet to be implemented, such as new icons for secure networks and signal strength.

You can see in the screenshots below how much more refined the network dialogs now look.

We should make the desktop more social, making it easier for users to not only use their computer but participate in something much larger, be it ubuntu or any other community they have an interest in.

Karmic has even been dubbed with an unofficial slogan: “Social right from the start.” 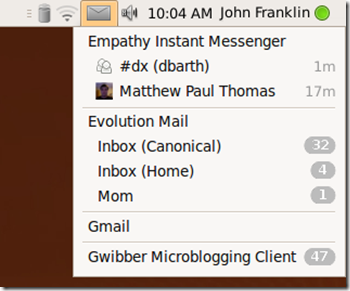 Gwibber integration is planned for Karmic ” from having social data in the Gnome “About Me” user profile, using Notification bubbles and the newly expanded ‘messaging’ menu. (Above)

Computer-Janitor will be undergoing a complete UI overhaul for Karmic. The aim is for a “..clearer, more usable user interface”.

I’ve made a quick mock-up based on the specifications from the information on the wikipage.

UbuntuOne ” Canonical’s cloud storage service ” will be included in Karmic, but any current beta users will find much deeper integration than currently available in Jaunty.

UbuntuOne in Karmic will be able to use/sync/share the following data between computers: –

Another key feature of UbuntuOne in Karmic will be the option to share data with other computers via LAN.

WUBI (Windows UBuntu Installer) will gain a ‘migration’ tool of it’s own that will allow existing WUBI installs to be transferred to their own dedicated partition ” thus benefiting from faster performance.

When an Ubuntu CD is inserted in an existing WUBI install, it will detect it and ask the user if they wish to migrate their existing set-up or install a-fresh. Various options during the normal install process will be removed (such as presenting options to wipe/format entire disk) and (finally!!) fstab will be re-written from scratch during the migration.

(Anyone who has tried to migrate a WUBI install to it’s own partition may well have been greeted with fstab errors aplenty after reboot, resulting in the need for a fresh install.)

Empathy was all set to replace Pidgin as the default messaging in Client… until it implemented Voice and Video chat.

As of now, Empathy is still shipping in place of Pidgin, however a feature freeze exception is being mooted to continue to debate the merits of both clients.

Whilst the boot-screen in the video below is certainly NOT the new Karmic boot screen, it is a boot-screen using ‘XSplash’ ” a boot screen that uses the X Server (i.e What powers the GUI). It turned up very late in the Karmic Development timeline ” arriving a day before featurefreeze 1!

It seems very likely at that XSpash will be the boot-screen “manager” for Ubuntu Karmic.

Sebastiaan Franken > Remove .deb and .rpm and together with them all…
How to Install Microsoft Edge on Ubuntu & Linux Mint

Mikko i destroyed it on windows 10 so why install it on linux ?
How to Install Microsoft Edge on Ubuntu & Linux Mint